The Royal Mint have launched (5th January) their new memorial anniversary crown produced in precious metals and dedicated to one of the country’s most revered leaders. This year marks the 50th anniversary of the death of Sir Winston Churchill who passed away on the 24th January 1965.

Winston Leonard Spencer-Churchill (1874 – 1965) was born into one of England’s most aristocratic families, that of the Dukes of Marlborough, who were themselves a branch of the Spencer family. His father, Lord Randolph Churchill, was a charismatic politician who served as Chancellor of the Exchequer; and his mother, Jennie Jerome, was an American socialite. As a young army officer, he saw action in British India, the Sudan, and the Second Boer War. He gained fame as a war correspondent and wrote books about his campaigns. Churchill was twice Britain’s Prime Minister, and twice helped the United Kingdom through the dark days of war. He was a great leader, soldier and artist, and as a writer he was awarded the Nobel Prize in Literature. He was a Knight of the Garter, Companion to The Queen, and the first honorary citizen of the United States by Act of Congress. His thoughts and insights were respected both in and out of political office – this was the man who coined the term ‘Iron Curtain’ and warned the world of the grip of the Cold War. He was a brave soldier, even serving on the Western Front after vacating the prestigious post of First Lord of the Admiralty. 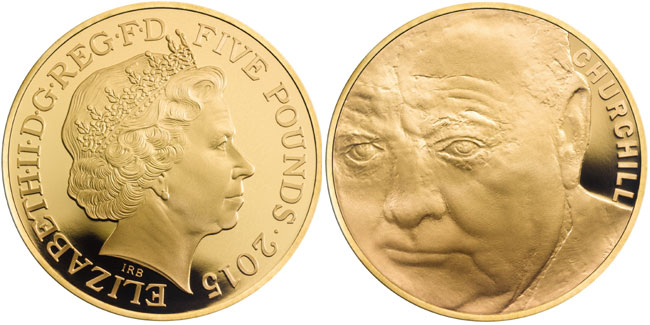 On the death of Winston Churchill in 1965, The Royal Mint issued a coin which became a much sought-after piece, the essence of the great man, with his stoic “bulldog” expression, depicted in a World War II siren suit was captured so memorably by Oscar Nemon. In 2015, 50 years later, a second coin is issued, this time designed by Mark Richards FRBS, honoring Sir Winston Churchill as an individual – the only statesman ever to be commemorated on two coins created in his honor. The portrait of Churchill is instantly recognizable on the new coin, a man who was larger than life, almost impossible to capture in the usual confines of coin design. The obverse includes the effigy of HM Queen Elizabeth II as designed by Ian Rank-Broadley FRBS and used on all circulation coins and many commemorative since 1998 until this year, when a new and fifth definitive effigy will be introduced later on this year.

An appropriate edge inscription included on all strikes of this exceptional crown which reads “NEVER FLINCH, NEVER WEARY, NEVER DESPAIR”. The new coin is available as a single silver crown, a piedfort (double thickness) silver crown, a gold crown and a platinum piedfort crown all struck to proof quality. A base metal version of the Churchill crown was issued late last year in cupro-nickel produced in BU quality.

For more information or to place an order for any of the Royal Mint’s coins marking the 50th anniversary of the death of Sir Winston Churchill, please visit this section of their website. Information offered in English, international orders dispatched.