The Royal Canadian have announced the release of their latest collector coin which honors both the bi-centenary of the War of 1812 and their national hero, Sir Isaac Brock, (1769 – 1812) who is remembered for the preservation and defense of Upper Canada against invading American armies. Known as the Hero of Upper Canada, Brock led successful campaigns against the Americans most notably during battles in Detroit and Fort Mackinac. Brock was killed during the Battle of Queenston Heights which ultimately saw a British victory. Brock’s remains were interred in a monument built which overlooks Queenston Heights in 1824 with a further memorial being constructed in 1840 which still stands. 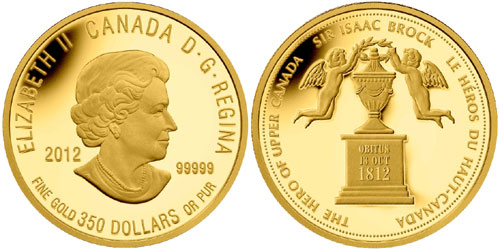 The coin, struck in .99999 pure gold with a face value of 350 dollars, borrows a design from a half penny token issued in 1816 as an memorial to Sir Isaac Brock. The original image includes two cherubs placing a memorial wreath upon an urn whose monument commemorates the date of Brock’s demise, OBITUS 13 OCT 1812. (The traditional imagery of the wreath, urn and monument signifies “death with honour.”) Two hundred beads were struck around the coin to represent the bicentennial of Sir Isaac Brock’s demise. Text around the design reflects the wording of the original, “THE HERO OF UPPER CANADA/SIR ISAAC BROCK,” and is repeated in French “LE HÉROS DU HAUT-CANADA.” The obverse includes a portrait of HM Queen Elizabeth II which is the current image used for circulation and commemorative coinage, designed by Susanna Blunt, the portrait has been in use since 2003. The fineness and face value appears below the portrait.

Struck in proof quality, the coin weighs 35 grams with a diameter of 34 mm. The coin is authorized for a mintage of up to 1000 pieces. This limited edition coin is encapsulated and presented in a Royal Canadian Mint branded maroon clamshell case lined with flock and protected by a black sleeve. A silver one dollar coin also marking the bi-centenary of the war of 1812 was issued earlier this year in both proof and FDC quality.

For more information on this and other coins offered by the Royal Canadian Mint, please visit their website at: http://www.mint.ca/store/coin/fine-gold-350-coin-sir-isaac-brock-mintage-1000-2012-prod1520002 International orders gladly fulfilled.