The Royal Australian Mint has released a $1 coin featuring Sir Douglas Mawson. This is the latest release of the Inspirational Australians series which commemorates people have made an extraordinary contribution to society.

Douglas Mawson (1882-1958) was an Australian geologist, Antarctic explorer, and academic. He was knighted for his achievements in leading the Australian Antarctic Expedition between 1911 and 1914. Mawson’s image appeared on the Australian one hundred dollar note from 1984 to 1996. 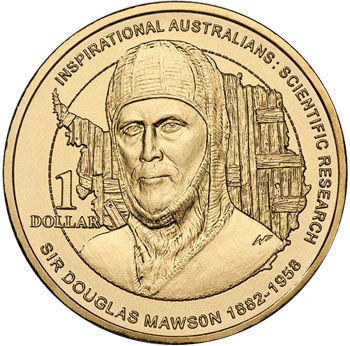 The design of the coin features a portrait of Sir Douglas Mawson with a map of the Antarctic Territory in the background. The surrounding inscriptions include “Inspirational Australians”, “Scientific Research”, and “Sir Douglas Mawson 1882-1958”. The legal tender denomination of “1 Dollar” also appears.

Each coin is struck in aluminum bronze with a weight of 9.00 grams and diameter of 25.00 mm.