A test strike of the first-ever silver Krugerrand is will be shown at the Florida United Numismatists (F.U.N.) Show in Fort Lauderdale, Florida. The coin will be on display from January 6 at Modern Coin Mart’s booth (#505), where it will be in a rotating display that will allow it to be viewed up close.

The South African Mint originally intended the silver Krugerrand to be available for purchase in North America on December 5, 2016. When the first shipment of coins arrived, however, the coins were found to have sustained damage during the trip. In a press release, the mint stated that the coins “did not travel well and arrived with scratches and markings.” Rather than release the damaged silver Krugerrands, the mint chose to delay the release date until the shipment could be replaced.


Interest in a silver Krugerrand spread like wildfire when the coins were first announced last year. 2017 marks the milestone 50th anniversary of the gold Krugerrand, which was world’s first modern gold bullion coin. The Krugerrand has been the model for all other bullion coins issued since its 1967 debut. Until now, only gold Krugerrands have been issued; but as part of the celebration of the coins’ 50th, the South African Mint has opted to release 1 million of the coins in silver. The display of the test strike at the F.U.N. Show is not only an opportunity for collectors to see the coin in person, it’s a good way to buoy interest after the anticlimactic announcement of the delay.

As mentioned, the coin will be on display at the Modern Coin Mart booth. Modern Coin Mart and GovMint.com are the official North American distributors of the silver Krugerrand. Further news on availability of the coins, along with videos and other information, are available at the MCM website.   ❑

Michelle Hudson graciously contributed this photo of the coin on display at the show. Thank you, Michelle! 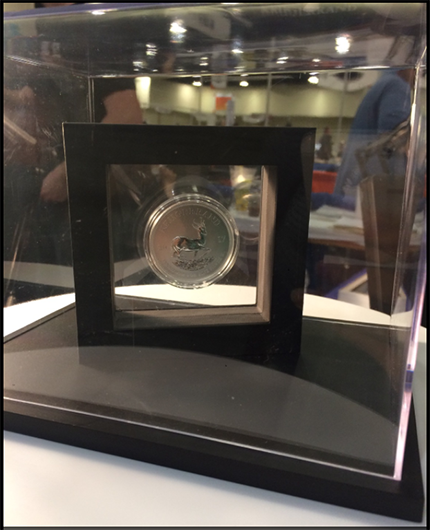