The Royal Dutch Mint have unveiled (19th February) their latest design of the silver Ducat or “rijksdaalder” series. This version of the twice-yearly issue pays homage to the current home of all Dutch coin production, that of the province of Utrecht where the Royal Dutch Mint has been located for the past 100 years.

First issued by the Republic of the Seven United Netherlands provinces in 1589, these historic coins played an important part in the Dutch economy, especially in world trade from the sixteenth to the nineteenth centuries. The first examples of the one ducat coin were originally struck during the Dutch Republic (1581 – 1795). These coins, still issued under the Dutch coinage act are struck in the standard .873 silver fineness commonly used for this type of trade coin. The design of the modern series changes bi-annually, and several styles utilized over the more than 300 year period of the historic daalder have been re-created since this modern proof collector series was introduced in 1989.

The obverse of the latest release depicts a standing portrait of William III of Orange-Nassau in the armor of the anonymous knight. The Royal Knight is positioned on an outline of the province of Utrecht. Just under the standing Knight is the coat of arms of Utrecht along with the text “ MO. NO. ARG. REG. BELGII. TRAJ” (Moneta Argentea Ordinum Foederati Belgii Trajecti). The reverse carries the inscription “CONDORDIA RES PARAVE CRESCUNT” (In Harmony Small Things Grow) along with a crowned version of the present coat of arms of the modern Dutch state and the year of “2012” with two numerals placed on either side of the crest.

The coin is struck in proof quality with a weight of 28.2 grams and a diameter of 40 mm. The mintage is limited to 5,000 pieces. The Royal Dutch Mint are taking pre-orders for delivery in April. 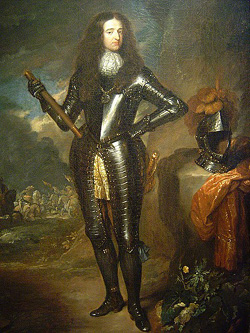 For more information on this and other coins offered by the Royal Dutch Mint, please visit their website at: http://www.knm.nl/Zilveren-Dukaat-Utrecht-2012/nl/product/2171/