The Neil/Carter/Contursi specimen 1794 Flowing Hair Silver Dollar has sold for $7,850,000, setting a new record as the world’s most valuable rare coin.  Graded PCGS Specimen-66, it is the finest known 1794 dollar and believed by several prominent experts to be the first silver dollar ever struck by the United States Mint. 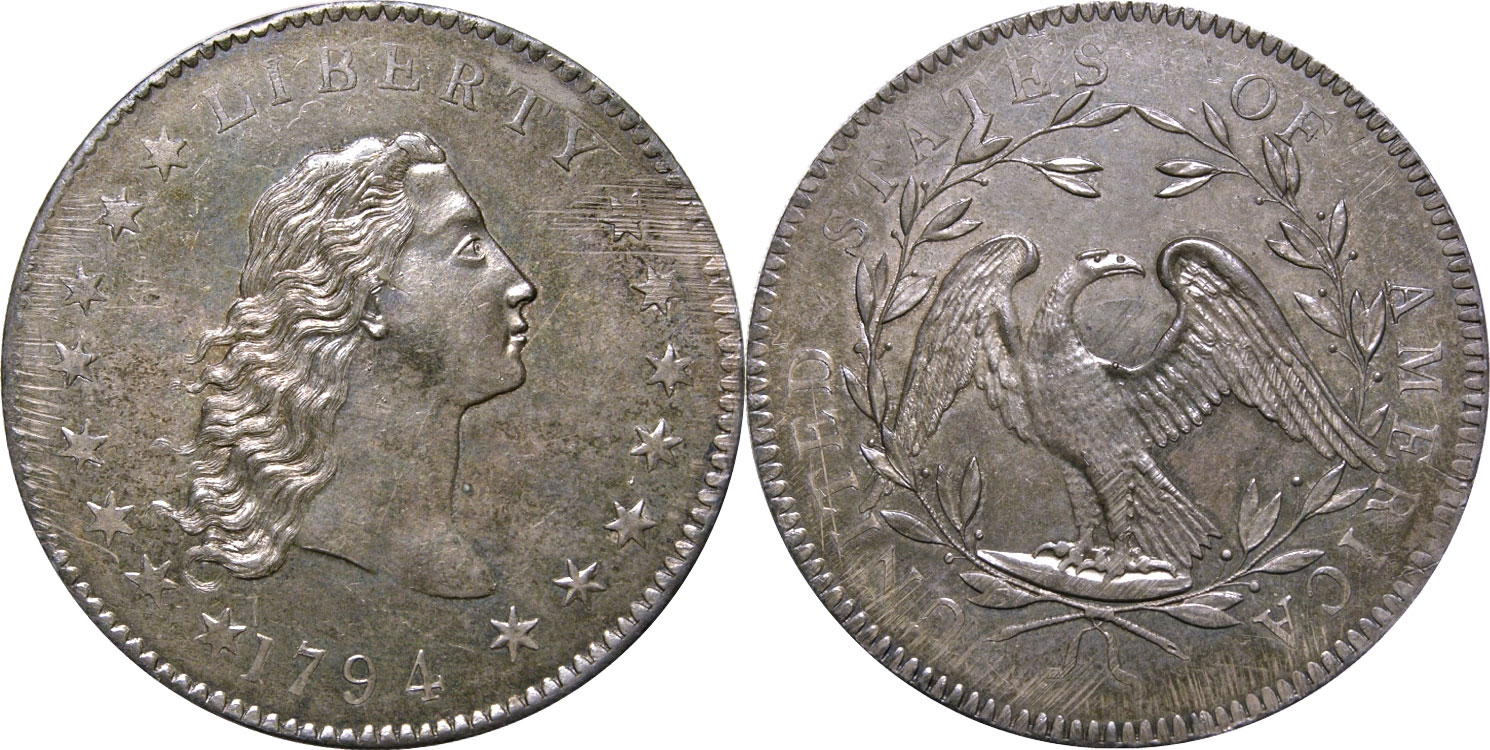 The coin was sold by Steven L. Contursi, President of Rare Coin Wholesalers of Irvine, California, to the nonprofit Cardinal Collection Educational Foundation (CCEF) in Sunnyvale, California.  Collector and numismatic researcher Martin Logies represented the foundation of which he is a director and its numismatic curator.  The private sale was brokered by Greg Roberts, President and Chief Executive Officer of Spectrum Group International of Irvine, California.

“This is a national treasure, and I’ve proudly been its custodian since 2003,” said Contursi.  “I never wanted to simply hide it in a vault because this coin is to our economy and international trade what the Declaration of Independence was to our country’s freedom: a significant piece of history and a national treasure.”

Contursi used his investment to publicly display the coin in a dozen cities around the country and at the American Numismatic Association’s headquarters museum.  He had a custom-made, four foot tall wooden exhibit case constructed so it could easily be viewed, and estimates that tens of thousands of people saw the coin in person the past six years.

“CCEF will seek to be a worthy successor custodian for such an important U.S. historical treasure,” said Logies.  “I think it only fitting that the new world’s record coin price be accorded to the world’s finest 1794 dollar.”

Roberts, who brokered the sale, stated: “The Spectrum Group of companies were honored to be involved in the historic transaction that culminated in the transfer of this piece of American art into deserving hands.”

Over the decades, various numismatic researchers have stated a similar belief including Walter Breen, Jack Collins, John Dannreuther, David Hall and Logies who is author of the book, The Flowing Hair Silver Dollars of 1794.

A total of 1,758 silver dollars were recorded struck on a hand-turned screw press at the Mint in Philadelphia on October 15, 1794, the only day of production for dollar coins that year.  They were made from silver provided by then Mint Director David Rittenhouse, and intended to replace the Spanish, English, Dutch and French coins that dominated local commerce and “pocket change” of the post-Colonial era.

Logies estimates there are only about 140 surviving examples, and the Neil/Carter/Contursi specimen is unique among them. 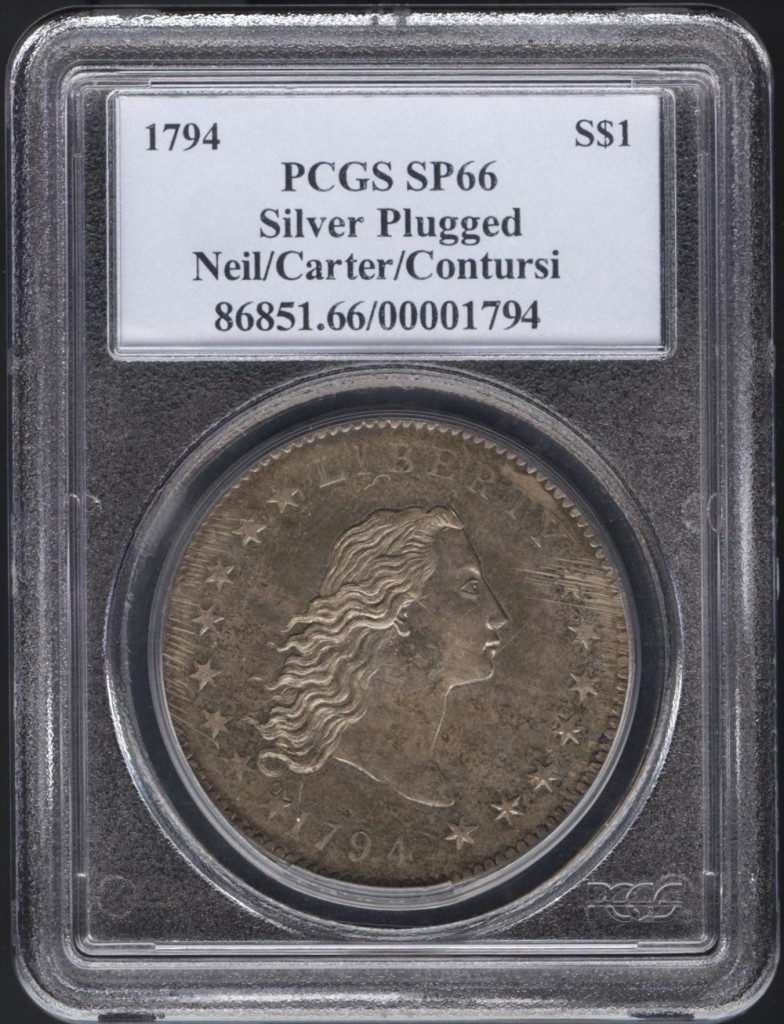 “It’s the finest in state of preservation and unique for 1794 with a silver plug.  It’s also unique in being from the earliest state of the dies.  Despite the almost barbaric conditions at the Mint at the time, this coin was struck incredibly well.  In fact, when the coin is viewed in its natural state outside of its PCGS holder, it blazes with a character all its own, showing off lovely light toning atop supremely deep, watery mirrored fields and frosted devices in black-and-white cameo contrast, not unlike late 19th century proofs.  It is certainly impressive and was clearly viewed as important on the day it was made, the hallmark of a first strike,” he stated.

From 2004 to 2009, the coin was a featured exhibit at the American Numismatic Association’s Edward C. Rochette Money Museum in Colorado Springs, Colorado, and was displayed at a half dozen ANA World’s Fair of Money and National Money Show conventions around the country.

“For five years, this spectacular 1794 dollar gave visitors to the ANA Money Museum an opportunity to view a true historic treasure,” said ANA Executive Director Larry Shepherd.  “Collectors from around the world were able to see and appreciate this important numismatic piece both in our museum and at ANA conventions where it always proved to be a marquee attraction.  In fact, its success as a highlight of our shows helped inspire our Museum Showcase which enables thousands of ANA convention attendees each year to see some of the hobby’s greatest rarities.”

In the year following his acquisition of the coin, Contursi made arrangements with top numismatic researchers across the country to personally see it and provide the evidence this specimen was the first silver dollar struck by the United States.  In addition, at the 2004 ANA summer convention in Pittsburgh, Pennsylvania the coin was carefully and briefly removed from its PCGS holder so it could be closely examined by experts assembled there.

Dannreuther stated at the time: “The condition of the coin is pristine.  It was never in a bag or keg of coins, indicating that it was caught after minting and has had special care since its striking.  The color is original and this indicates that for its ‘lifetime’ its owners – or should I say, caretakers – have absolutely KNOWN it was special.”

Known by collectors as the Flowing Hair variety of early U.S. silver dollars, the obverse depicts 15 stars around the symbolic Miss Liberty with long, flowing hair with the word, LIBERTY, above her and the date, 1794, below.  On the reverse the words, UNITED STATES OF AMERICA, surround an olive tree branch and a somewhat scrawny-looking eagle that would be enhanced in subsequent designs starting in 1795.

The coin’s pedigree name, Neil/Carter/Contursi specimen, comes from previous owners, Will W. Neil whose collection was sold it in 1947, and Amon Carter Sr., Fort Worth newspaper publisher and philanthropist who purchased it at that sale.  Contursi acquired it “for millions of dollars” in 2003 from the Knoxville Collection described as the best type set of U.S. silver coins at the time.

CCEF maintains several web sites to provide information about early American coins, including www.EarlyUSCoins.org and www.EarlyDollars.org that features an interactive “treasure hunters” guide for easily attributing early U.S. silver dollars by die variety.  Another web site is planned, www.CCEFlibrary.org, that will be devoted to providing the public with access to the foundation’s extensive numismatic library.

“Of all the rarities I have seen or heard of, there is no doubt in my mind that this is the single most important of all, the very first silver dollar.  This is the coin that has it all,” said Logies.