The Treasury of the Government of Alderney have launched (4th February) a crown coin marking the 100th anniversary of the maiden voyage of HMS Titanic, the White Star Line luxury liner, which was considered unsinkable. 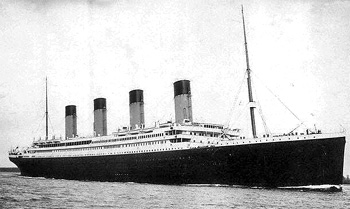 The passenger liner with 2,223 passengers set sail from Southampton on the 10th April 1912 destined for New York, but sadly collided with an iceberg four days into her voyage and sank 375 miles southeast of Halifax, Nova Scotia taking with it 1,517 fatalities. It was the worst peace-time nautical disaster and one of the primary causes noted at the time was the availability of lifeboats for no more than 1,178 passengers and crew. This resulted in a complete overhaul of the safety precautions for commercial passenger steamship travel.

Among some of the more noteworthy passengers were millionaire John Jacob Astor IV and his wife Madeleine Force Astor, industrialist Benjamin Guggenheim, Macy’s owner Isidor Straus, and Denver millionairess Margaret “Molly” Brown, known afterward as the “Unsinkable Molly Brown.” The story of this maritime disaster was the subject of several motion pictures, including more recently the 1997 “Titanic” blockbuster which won an academy award for best movie.

The reverse design of the £5 coin depicts a sleek profile of the RMS Titanic with designer Lee Robert Jones’ rendition of Thane (from the Thane Memorial within Belfast City Halls Grounds erected in 1920) looking down on the ship as she sails through the sea. The obverse includes the well-known effigy of HM Queen Elizabeth II sculpted by Ian Rank-Broadley which has been used on British and commonwealth coinage since 1998. The denomination also appears on the obverse.

The coin is struck to proof quality in sterling silver with a weight of 28 grams and a diameter of 38.6 mm. A cupro-nickel version struck in FDC quality is also available.

For more information on this and other coins offered by the Royal Mint, please visit their website at: http://www.royalmint.com/store/WorldSilver/TT12SP.aspx