The National Bank of Poland have issued a collector’s coin to highlight Polish popular music along with those artists seen as instrumental in bringing their style of entertainment to national attention. The coin is the latest release in the on-going series highlighting popular culture and entertainment. 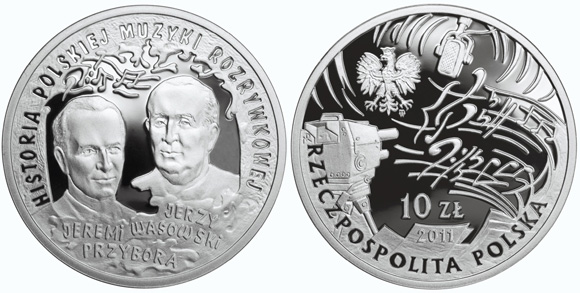 Jeremi Przybora (1915 – 2004) and Jerzy Wasowski (1913 – 1984) are considered among the most prominent entertainers in Poland during their lifetime and are noted to have contributed to popular polish culture with the composing of songs, poems, and scripts as well as creating television shows and memorable characters. The obverse of the coin depicts the duo in front-facing portraits along with text reflecting the coin series (History of Polish Popular Music) and the names of both entertainers below their image.

The reverse includes elements of a TV camera seen to the far left, a microphone and sections of sheet music & notes along with the coin’s face value of 10 Zlotych and national emblem, the eagle positioned just above the television camera. The year of issue “2011” is located just below the denomination.

The coin is issued as a sterling silver proof with a weight of 14.1 grams and a diameter of 32 mm. A total mintage of 50,000 pieces has been authorized. This coin and its square-shaped companion piece are the last silver collector coins issued by the National Bank or the year.

For more information on this and other coins issued by the National Bank of Poland, please visit their website at: http://www.nbp.pl/homen.aspx?f=/en/banknoty/kolekcjonerskie/2011.html#15