The United States Mint has started accepting orders for the 50th Anniversary Kennedy Half Dollar Silver Coin Collection. This special numismatic product is issued to mark the 50th anniversary of the series and features four 90% silver half dollars struck at different mint facilities with different finishes.

This represents the third 50th Anniversary Kennedy numismatic product issued for this year. In July, the Mint had released a two coin set containing clad composition half dollars. This was followed in August with a three-quarter ounce 24 karat gold coin offering. Both of these products still remain available for sale at the Mint. 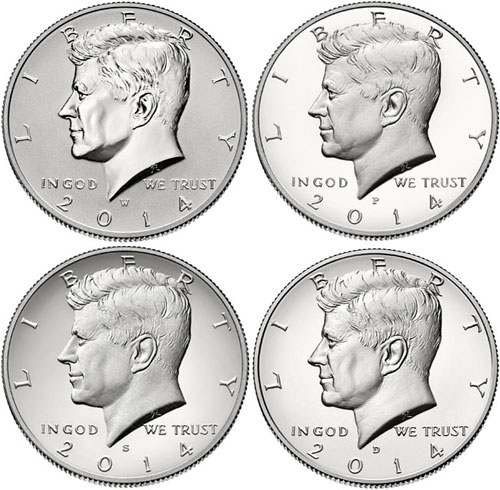 Each of the four coins included in the 50th Anniversary Kennedy Half Dollar Silver Coin Collection features a restored version of the original 1964 obverse portrait design by Gilroy Roberts. Over the years, various tweaks and modifications to the design had left it with a very different appearance than the original. The idea to restore the original portrait came from a San Francisco Mint employee Michael Levin. The restored portrait has been used for all of the coins included in this year’s 50th anniversary Kennedy Half Dollar products.

The silver coin collection includes one reverse proof coin struck at the West Point Mint. The finish features mirrored raised design elements and inscriptions against a frosted background, providing the opposite appearance of the traditional cameo proof. This represents the first Kennedy Half Dollar ever struck with a reverse proof finish.

The third coin within the collection is struck at the San Francisco Mint and features an enhanced uncirculated finish. Different degrees of laser frosting and wire brushing are used to provide a unique appearance. The portrait, lettering, and border on the obverse, and the lettering and border on the reverse, receive a heavy laser frosting treatment. Other elements of the eagle on the reverse receive a standard laser frosting treatment to enhance certain artistic detail. The stars receive a laser polish technique to accentuate them against the field. This is only the second coin issued by the United States Mint which features an enhanced uncirculated finish and the first for the series. 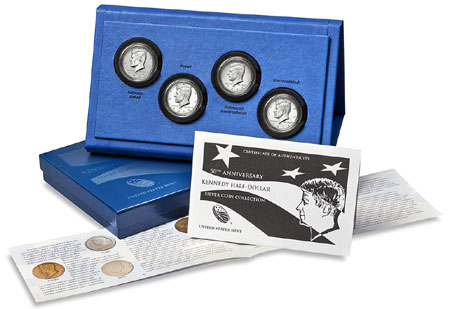 All four coins of the collection are housed in a rich embossed faux leather folder with an image of John F. Kennedy from the half dollar and patriotic flag imagery. The US Mint logo appears on the front of the folder with the Department of Treasury Seal on the back. A booklet on the development of the design for the half dollar and a separate printed certificate of authenticity are also included.

Each set is priced at $99.95. Sales are conducted through the US Mint’s website at http://catalog.usmint.gov and by phone at 1-800-USA-MINT.

A product limit of 300,000 units has been established for this release with an initial ordering limit of five units per household imposed. The US Mint will monitor sales and adjust or remove the limit as necessary during the period the product remains for sale. For the start of sales, the Mint has indicated that they will have more than 180,000 immediately available to meet demand.