The British Royal Mint has issued a new £2 silver proof coin in the “Britannia” series which was begun in 1997. This design, which alternates or changes every year, shows a dramatic and wind-swept representation of a helmeted Britannia looking to the right along with the word “BRITANNIA” to her left and the year of issue, “2010” underneath the portrait. 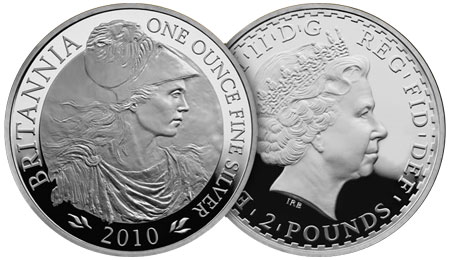 This design for the 2010 Silver Britannia has proven to be very popular with collectors due to its classical and detailed representation and has been described as the best design in the series.

Sculptor Susan Zamit who created the new portrait said,”I wanted to portray Britannia as strong (almost Amazonian) and courageous looking, but not overly warlike; more peaceful and protective. I have given her a Corinthian-style helmet and incorporated a lion on the design: the lion being the national symbol of courage – I wanted to emphasize the strong and watchful connotations – and this also links in with Greek and Roman coinage which display many animals.”

The coin is struck in both FDC and Proof, with the proof edition limited to just 8,000 pieces. It has a diameter is 40 mm and weighs 32.45 g of Britannia silver which is 95.8% fine. The obverse carries the familiar Ian Rank-Broadley portrait of Queen Elizabeth II.