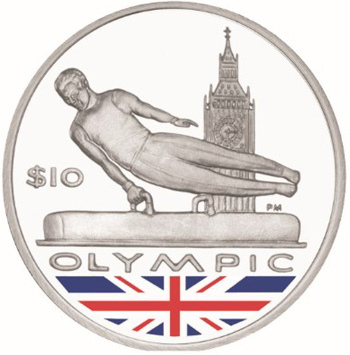 First coin: Depicts a gymnast performing on a pommel horse. This sport is predominately performed by male gymnasts due to the physical strength required. In the background is the famous London Clock Tower which houses Big Ben, the bell which chimes over the Houses of Parliament. 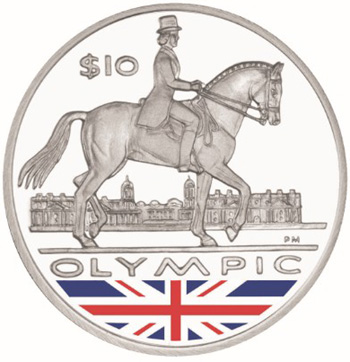 Second coin: Features a mounted equestrian competing in the old tradition of dressage. Dressage was initially developed as a method of training horses for war and includes displays of rider control and horse obedience. In the background is the Old Royal Naval College in Greenwich which incorporates the National Maritime Museum. Third coin: Portrays the historical sport of Fencing. The art of formalized dueling dates back to pre-Roman times, but William Shakespeare is said to have been the first person to use the word ‘fence’ in reference to English Swordsmanship. The two fencers on the coin are engaging in competition. The Tower of London is featured in the background. 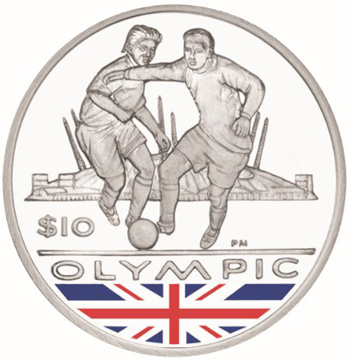 Fourth coin: Shows one of the most popular sports in the United Kingdom (and perhaps the World), football. The first description of a football match in England was written in about 1170.  Records from London reveal that “after dinner all the youths of the city goes out into the fields for the very popular game of ball.” Two players are shown chasing after the ball with the Dome in the background. All designs feature the word ‘Olympic’ below the sportsman and include the Union Flag of the United Kingdom of Great Britain and Northern Ireland which is placed at the base of the coin. Approved by Buckingham Palace, the obverse of each coin carries a unique double effigy showing a portrait of Her Majesty Queen Elizabeth II as she appears on current coins, along with a portrait of The Queen based on how she appeared on the first coins of her reign in celebration Her Majesty’s Diamond Jubilee Year.

The coins are available in Cupro Nickel, Proof Sterling Silver Crown size with a weight of 28 grams and a diameter of 38.6 mm.  A second alternative in Fine Silver with a weight  of 12 grams and a Crown size diameter (38.6 mm) is also available. Both the Proof Sterling Silver and Uncirculated Cupro Nickel coins are available with a color-effect Union Flag to create a striking look.

For more information on these and other coins on offer by the Pobjoy Mint, please visit their website at: www.pobjoy.com.