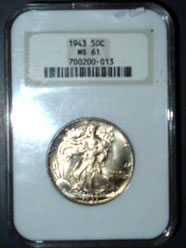 At coin clubs, shops and shows, I meet collectors and dealers who complain about bad grades by the top four grading companies–NGC, PCGS, ANACS and IGC–keeping suspect slabs for show and tell.

“Look at this Morgan dollar!” a collector might say. “Why did it grade AU58 when it is obviously uncirculated?”

Well, mistakes and misgrades happen. Moreover, the complaining collector often is right about the misgrade for the simple fact that he or she has kept it as a prized possession.

I call these “show-and-tell” holders because collectors use them as talking points when talking down grading companies.

For every mistake or misgrade, the collector probably could boast five accurate and a few overgrades by a favorite grading company.

But it’s true: Just as we like to find errors by the U.S. Mint, we also like to locate errors by top-flight graders.

I admit it. I had a show-and-tell collection a few years ago. Back then I sold for $100 an NGC-graded MS70 2006 Franklin silver commemorative, labeled “Scientist” when it actually was “Founding Father.”

So sometimes the mistake is not in the grade but on the label, and there are collectors who pay premiums for mislabeled coins.

I still own a former show-and-tell 1943 Liberty Walker half dollar that had natural rainbow toning on the rim and was graded MS61 by NGC. I took a picture of it (above) and resubmitted it, and the coin was returned MS63, probably the right grade, although I was hoping for an MS64 or MS63 Star. 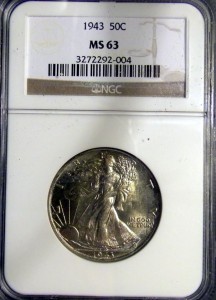 I concede the point to NGC. At any rate, I had gotten enough mileage with that half dollar in coin club, showing and telling how undergraded the coin was.

Despite plus grades, stars and registry sets, I still recommend buying the coin and not the holder … unless, of course, you want the slab for show and tell.