Have you ever had the experience of bidding in an online auction, only to see your maximum bids surpassed almost immediately by a particular bidder? You are not sure if this is a competitor, a consignor, or even the auctioneer. You only see initials separated by asterisks as in this made-up example: x***4. But that’s enough to raise suspicions that someone is “shill bidding,” which eBay defines as follows:

Shill bidding is when someone bids on an item to artificially increase its price, desirability, or search standing. Shill bidding can happen regardless of whether the bidder knows the seller. However, when someone bidding on an item knows the seller, they might have information about the seller’s item that other shoppers aren’t aware of. This could create an unfair advantage, or cause another bidder to pay more than they should. Also, eBay forbids sellers or their employees from bidding on lots.

Concerning the Roman Empire coin above, I had been bidding on it and other ancient lots when, within minutes of placing maximums, they were surpassed. I contacted the auctioneer and asked him whether he saw maximum bids and whether he or his consignors were placing bids on my lots.
Here is the email chain that followed (read from bottom up): 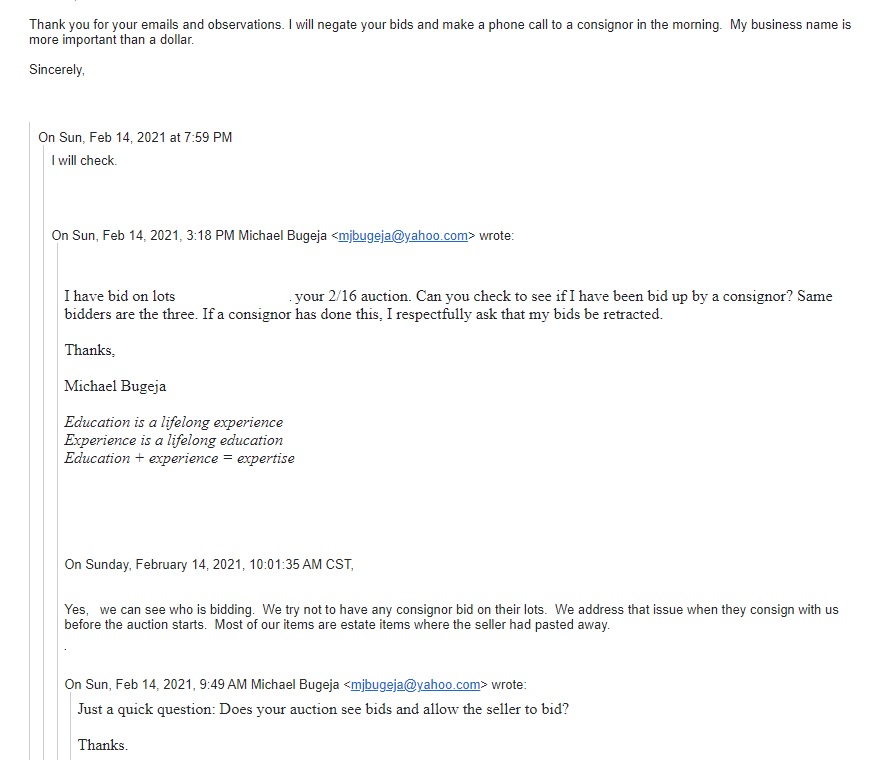 Thankfully, I was dealing with an honest auctioneer. He retracted bids because his reputation mattered.
To understand shill bidding, you have to know the various types of coin auctions.
A live auction happens at a certain place and time, often inviting Internet pre-bids before the actual session. There is no way for online bidders to ascertain whether the auctioneer or employee is shill bidding in the live session. Conversely, those auctioneers may want to know maximum bids so they can facilitate bids in the live session. That’s reasonable. But still places online bidders at some disadvantage, especially if auctioneers start live bidding at the Internet maximum.
Then there are timed auctions with “soft closes.” A soft close prevents buyers from placing a bid in the final seconds. When that happens, additional minutes are added so more bids can be placed. Shill bidding happens less frequently as lots close because odds are the seller or auctioneer will win back the coins.
(Note: Without a soft close, online auctions invite “sniper” software — especially popular with eBay lots — that places maximum bids digitally in the final seconds.)
Some auctions have reserves. For instance, sellers can set opening bids on lots, typically at wholesale dealer prices. Some abuse this option, setting opening bids at retail prices, essentially using online platforms in the manner of an Internet coin shop. Sellers in reserve auctions also can set minimum prices on certain lots without disclosing those amounts but flagging with each bid whether that minimum has been met.
Auctioneers and consignors seldom bid in this type of auction.
The most popular type — and most subject to shill bidding — is an absolute or “no reserve” auction. This attracts buyers who seek to win a lot at or below wholesale prices. Often, however, in competition for a specific lot, buyers may spark a bidding war and pay multiples of what a coin might be worth at retail. That feature attracts sellers and consignors who hope they are mistaken as competitive buyers.
Legally, auctioneers or their employees are not allowed to shill bid on lots, a violation of the Uniform Commercial Code:

Proxibid and a few other platforms disclose the commercial code in terms of service for each auction. Proxibid discloses if sellers opt to see maximum bids or plan to bid on lots. Other venues simply ask sellers to obey the platform’s guidelines forbidding shill bidding. Here’s HiBid’s “buyback rule”:

Buyback and Price Manipulation. You shall not bid or make an offer, directly or indirectly, nor allow any other person to bid or make an offer on your behalf, by agency or otherwise, on your Listed Item(s) or any part of your auctions. In the event of price manipulation or a buyback, we may, in our sole discretion, ban you from future use of our Services.

While shill bidding is discouraged, there are reasons that auctioneers do it. In fact, one of my favorite auctioneers on Proxibid, Dave Coulby, who operates “Coinhunters,” doesn’t like the term “shill” because he doesn’t run up prices intentionally to make a higher profit. However, he does see maximum bids and can place bids on lots. That disclosure is required by Proxibid in Coulby’s terms of service, again pursuant to the commercial code.
Here is how he explains it:

Coulby would like to place a reserve on one or two pricey lots and leave the rest with no minimum. “There is an option to do this (on Proxibid) but costs the auctioneer a $500 minimum per auction.” He sells some of his own coins and wants to get at least 85 percent of what he has into it. So he looks at pre-bids. “If bids aren’t getting there, I will put the bid on my credit card. I end up getting charged five percent to do that, unless I get outbid.”
Coulby notes that sometimes consignors bid on their own coins mistakenly, “which is humorous because they like the coin so much they didn’t realize it was theirs in the first place.”

Nevertheless, Coulby has consignors, who, on occasion, will bid up their own coins, but he tries to discourage them from doing that. Reason? “We don’t want to run the same coins over again,” if the consignor wins the lot and asks it to be placed in a future auction. Those consignors are charged a 15 percent buyer’s fee. “That way it discourages them knowing they’ll have to pay more if they try it.”

Coulby mentions another reason for looking at pre-bids. He got scammed out of about $13,000 worth of gold coins. “Seems scammer-fraudsters mostly only target gold coins in my auctions. When they do that they will leave a large pre-bid. It’s pretty obvious because they will put a $3,000 or $4,000 pre-bid on a generic one-ounce gold piece. Since having opened the option to look at pre-bids, I will check them out before the auction now. I’ve caught maybe half a dozen and had them banned from Proxibid because of this.”

Shill bidding is here to stay in one form or another. But there are precautions you can take to guard against it.

Always ask if the auctioneer sees pre-bids and if he or she bids on lots or allows consignors to do so. If they do not reply, you can tell as I did when your bids are immediately surpassed by a bidder with the same initials. True, this could be a competitor, but you may want to stop bidding at this point.

If you suspect shill bidding, ask that your lots be retracted. Report evidence of illegality to the customer service department of the venue in question.

In the end, sellers who allow consignors to bid on coins should charge them for the entire purchase, including mailing, and return the lots. Auctioneers may lose a few consignors but will send them a message that shill bidding is prohibited.

Platforms that do not disclose information and allow shill bidding eventually lose return customers.
Because of Coulby’s honesty, he can count on me as a return bidder.