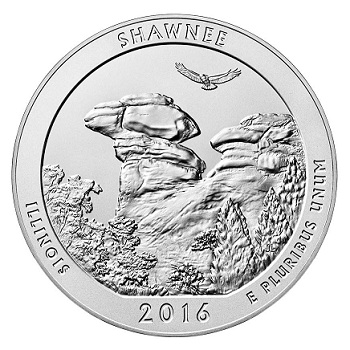 The 2016 Shawnee five-ounce silver bullion coin continues to be bought by the U.S. Mint’s authorized purchasers in remarkable quantities.

Sales for the issue have now reached 102,500 coins, which equates to 512,500 ounces of silver. This makes Shawnee the highest-selling ATB five-ounce bullion coin since 2011 and the fourth-highest ever. If it sells 2,400 more pieces it will surpass 2011’s Olympic National Park issue to become #3, behind Gettysburg National Military Park and Glacier National Park. As a point of comparison, the Mint sold a total of 113,800 ATB five-ounce bullion coins in all of 2012.

The Mint has set the overall mintage limit for all Shawnee 5 oz. coins at 150,000 units across bullion and Uncirculated issues. This represents an increase of more than 130% over the 65,000-unit limit imposed on 2015’s designs. As the Shawnee 5 oz. Uncirculated coin’s mintage limit has been set at 30,000, the maximum number of bullion issues possible for this design is 120,000, unless the Mint chooses to move some planchets slated for Uncirculated strikes into the bullion category.

The U.S. Mint sells its bullion issues to a network of authorized buyers, who then make the coins available to the public. The Uncirculated version of the 2016 Shawnee National Forest 5 oz. silver coin is scheduled to be released by the Mint on February 25.