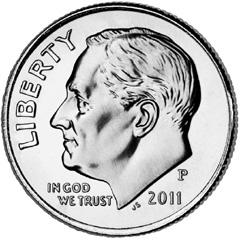 A bill was introduced in the Senate on December 1, 2011, which seeks to require the Secretary of the Treasury to mint and issue commemorative coins in recognition and celebration of the 75th anniversary of the establishment of the March of Dimes Foundation. A similar bill was previously introduced in the House of Representatives in October.

“I cannot think of a more appropriate way to recognize the March of Dimes than to mint actual coins honoring its work,” said Hagan. “From its efforts to help end the polio epidemic, to its work today to prevent birth defects and the number of babies born prematurely, the March of Dimes has made a difference in the lives of our families for more than seven decades.”

If the bill becomes law, up to 500,000 $1 coins would be minted and issued during the one year period beginning January 1, 2014. The coins would have a composition of 90% silver and 10% copper, diameter of 1.5 inches, and weight of 26.73 grams. Both proof and uncirculated versions would be produced, with at least one facility of the United States Mint used to strike the proof quality coins and at least one other facility used to strike the uncirculated coins.

Designs for the coins would be emblematic of the mission and programs of the March of Dimes, and its distinguished record of generating Americans’ support to protect our children’s health. The designs would be selected by the Secretary of the Treasury after consultation with the March of Dimes, Commission of Fine Arts, and review by the Citizens Coinage Advisory Committee.

A surcharge of $10 would be added to the cost of each coin, which would be distributed to the March of Dimes to help finance research, education, and services aimed at improving the health of women, infants, and children.