Earlier this month I sent five SEGS coins for crossover consideration at PCGS, noting that they were purchased from a reputable coin dealer known for grading prowess. You can read about that here.

Decatur Coin and Jewelry has a reputation for purchasing the best coins regardless of holder. In addition to a detailed lot description for each coin, dealer Bennie Strumpher notes that each coin came from one of his special buying trips, had “attractive high eye appeal” and “superior quality for the assigned grade.” In his coin-show searches, he and his team only buy 2 out of every 100 coins they inspect. He adds, “All of these coins we would buy for our own collections, so keep in mind that each coin offered here has to get past our eyes before it gets to yours.”

Decatur Coin is one of my trusted sellers because Bennie can grade, regardless of holder.

We all know the saying, “Buy the coin, not the holder.” If you look at a few comments of my earlier SEGS post, you’ll see some viewers criticizing SEGS and other lesser known but still semi-reliable holdering companies included in dealer wholesale newsletters that nevertheless tend to over-grade submissions. These critics dismiss SEGS, PCI, and ACG without realizing that they lack the reputation of NGC and PCGS because of inconsistent grading. Inconsistent means just that. Most may be overgraded but, indeed, many are undergraded, and it takes an expert eye–like Bennie’s–to tell the difference.

I purchased these SEGS Morgan dollars from Decatur Coin: 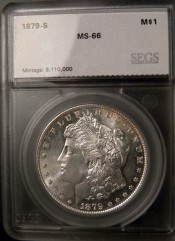 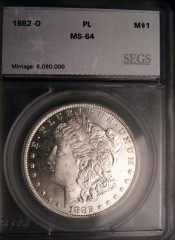 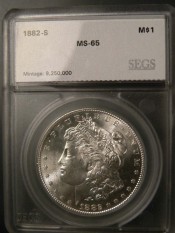 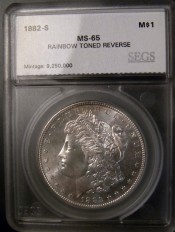 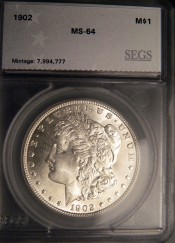 Because I purchased these coins online, I had to make a determination once in my possession whether to submit the coin for a possible crossover. In truth, the 1898 Morgan looked like an MS64, not MS65, so I didn’t submit it.

Shortly after my initial SEGS column posted, I saw the grades online and just received the coins at home, so I could photograph them for you. Here were the grades now with PCGS values: 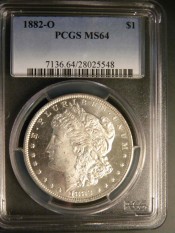 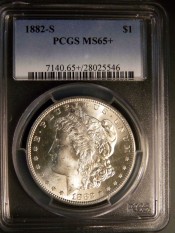 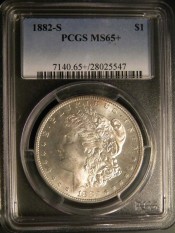 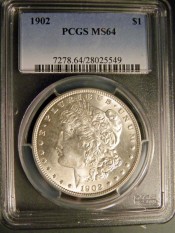 Let’s make some points about this exercise with SEGS, beginning with the maxim of buying the coin and not the holder. Inconsistent grading is just that. I have found rare VAMS and varieties in self-slabbed holders whose graders couldn’t tell a 7 tailfeather 1878 Morgan from an 8 TF, 7/8 TF, and Rev. of 79. I’m on a search on eBay for a self-slabbed 1901 Morgan with a shifted eagle reverse. You have to have an eye for these things, like Bennie at Decatur Coin, if you want to score in the crossover game.

Finally, and in response to some of the viewers who criticized SEGS in my earlier column, PCGS graders pay absolutely no attention to the holder when asked to evaluate crossovers. For years now I’ve been crossing over second-tier and bottom-tier coins with PCGS, and on occasion getting higher grades or full bell lines on Franklin halves (when FBL was not on the original slab). Those graders are paid for their consistent expertise, which entails evaluating the coin rather than being swayed one way or another by the holder and label.

That’s a lesson worth learning!