The United States Mint has released (December 18th) the 24th release within the American Presidency $1 Coin Cover series. This cover features President Grover Cleveland, who was also featured on the 22nd release of the series. Because Cleveland served during two non-consecutive terms, he is honored on two separate Presidential $1 Coins, which also results separate issues for various numismatic products. 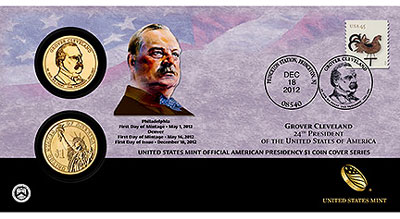 The 2012 Grover Cleveland (Second Term) Presidential Dollar Coin Cover includes two coins sourced from the first day of production at the Philadelphia and Denver Mint facilities. This occurred on May 1, 2012 and May 16, 2012, respectively. The two coins are mounted within an illustrated envelope with a 45-cent Weather Vane postage stamp. The postal cancellation is for December 18, 2012, Caldwell, NJ to mark the first day of issue for the numismatic product.

Pricing is $19.95 per cover. The US Mint has established a maximum product limit of 22,000 units. There are no household ordering limits in place.