The Perth Mint has released the second coin in the Dragons of Legend series. The one ounce 99.9% pure silver coin features the Chinese Dragon and has a limited mintage of only 5,000 coins. 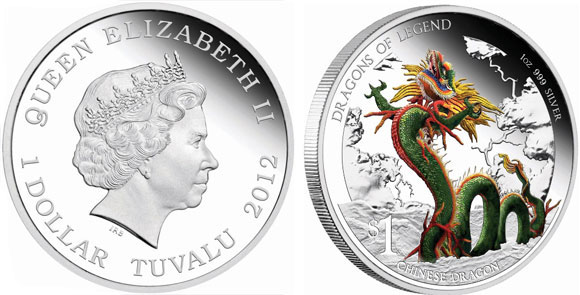 The reverse design by Howard David Johnson features a colored portrait of a Chinese Dragon rising from the sea against a dramatic skyline. The inscriptions include “Dragons of Legend”, “1 oz 999 silver”, “Chinese Dragon”, and the monetary denomination.

These coins are produced by the Perth Mint of Australia and issued as legal tender under the authority of the government of Tuvalu. Coin Club Australia will make a donation of $1.00 to UNICEF-Australia for each coin purchased in this program.

Each coin has a diameter of 40.60 mm, thickness of 4.00 mm, and weight of 31.125 grams. The fineness is 99.9% with silver content of 1 troy ounce. The coins are housed in a black presentation case with illustrated shipper and numbered certificate of authenticity.