The Austrian Mint have issued their second coin in the exciting new Prehistoric Life series featuring the many creatures who were found to be prevalent of middle and western Europe from the Triassic to the Quaternary period.

Tremendous changes occurred at the beginning of the Jurassic period. Pangaea, the massive continent, broke up and the early beginnings of the North American and Eurasia occurred. Water flooded the huge valleys, oceans were formed, and mountains were forced up from the ocean floors. The hot dry air became warm and humid. A subtropical environment nourished the lush landscape. The warm and shallower inland seas gave way to a great variety of life.  Reptiles made the greatest strides evolving from the water to the land and air because of their strong skeletons and intricate muscles. Their amniotic eggs were large and successfully supplied food and moisture to the young as they developed inside. 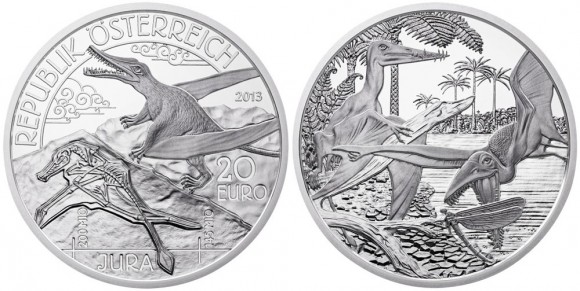 The obverse of the coin, designed by Mint engraver Thomas Pesendorfer depicts the Rhamphorhynchus, with its long tail, broad wing span and needle-like teeth angled forward in its snout. The Rhamphorhynchus, was less than a foot long but had a wing span of three feet, tiny feet and a tail. It belonged to the pterosaur class, which were primitive flying reptiles with short bodies and large wing spans.  Its wings were a thin membrane.  Its long snout was ideal for catching fish and tearing it apart. The Rhamphorhynchus is creatively depicted standing on the fossil of itself, which is on view today in the Natural History Museum in Vienna. Below the fossil on the coin is the time line which details the Jurassic period from 200 million years ago to 145 million years.

The reverse of the coin which is the work of Helmut Andexlinger of the Austrian Mint, features a dynamic scene of what life may have been like during the Jurassic period. A pair of large flying Rhamphorhynchus’ are depicted hunting a giant dragonfly at the water’s edge. The lush tropical vegetation climate is noted in the background ferns and palm tree-like cycads.

This new coin is the second coin in the five-coin series featuring Prehistoric Life. The timeline indicated on the obverse is continuous from the first coin through to the fifth and final coin of this series. In a First from the Austrian Mint, a unique gateway to the fascinating world of prehistoric life is offered with this coin issue, a free augmented reality App provides in-depth background information and brings the long-extinct creatures back to life in moving images. Using a smartphone or tablet, open the Austrian Mint’s website: www.muenzeoesterreich.at/urzeit/eng and click on the link to download our free augmented reality App. The images found in the coin certificates, and collector packaging make this experience possible.

For more information on this and other coins offered by the Austrian Mint, please visit their website at: http://www.muenzeoesterreich.at/eng Information offered in English & German, international orders fulfilled.