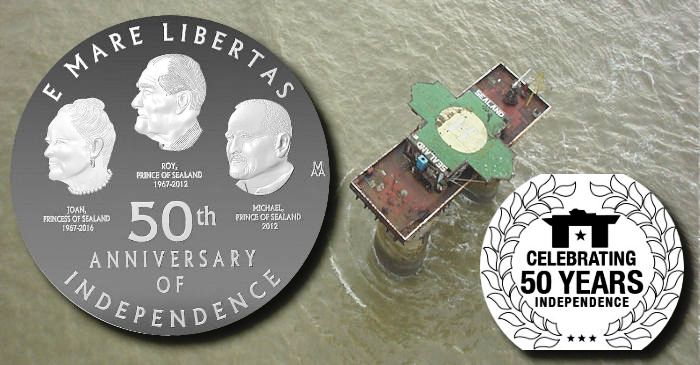 The treasury of the Principality of Sealand, the world’s only man-made and self-proclaimed independent micro-nation, have unveiled (15th September) the designs for their commemorative coin. The coin is to be issued in celebration of the 50th anniversary of Sealand’s declaration of independence, which occurred on the 2nd September 1967. On that day 50 years ago, four members of the Bates family, along with friends and supporters, raised the principality’s newly designed flag for the first time on the tower of Fort Roughs—an abandoned fortress built during the Second World War. Accompanied by his wife, Joan; his fourteen-year-old son, Michael; and his sixteen-year-old daughter, Penelope, Roy Bates founded an independent nation. From that day, the newly created sovereign, Prince Roy, successfully declared this man-made fortress island in the North Sea the independent Principality of Sealand. Prince Roy claimed jus gentium (law of nations) over a tiny part of the globe that was terra nullius (nobody’s land). Joan became the territory’s co-ruler as sovereign princess on the same day, which was also her 38th birthday. 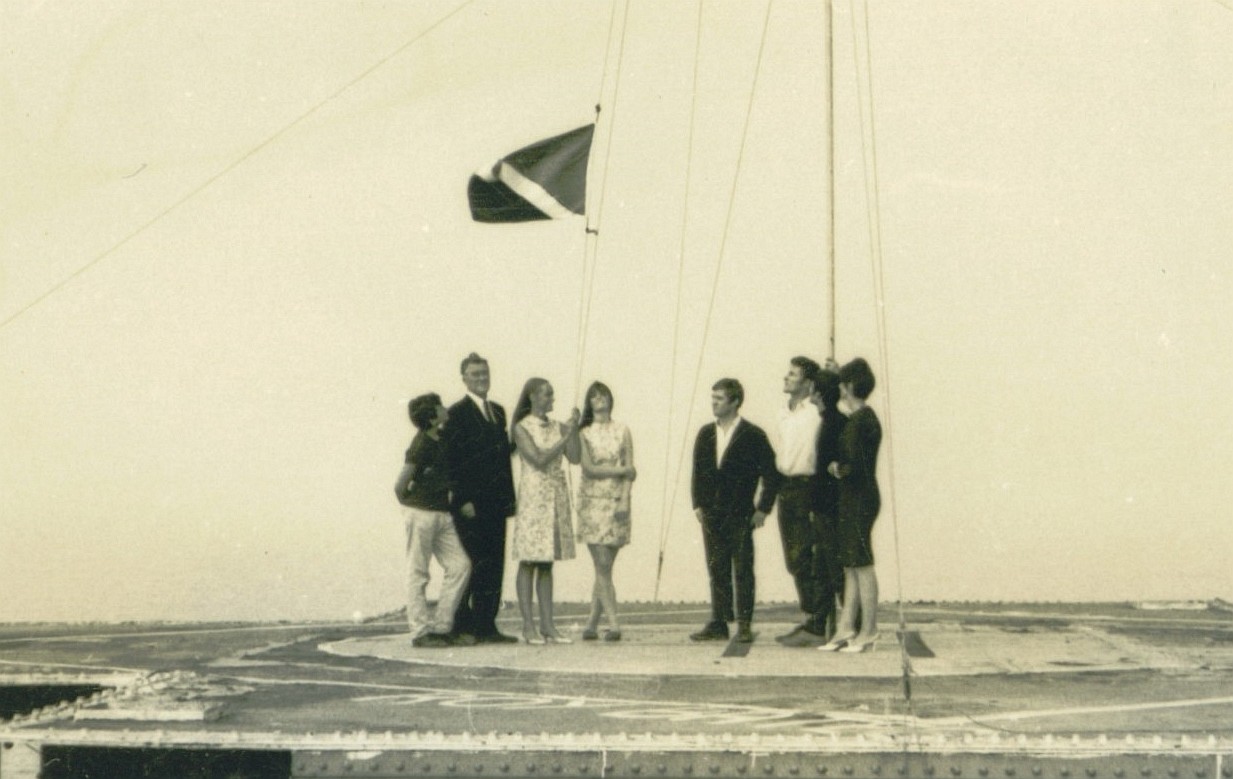 A photo of the first time Sealand’s flag was raised.

This is the second authorised commemorative coin since 2012 and was approved on the 1st September, one day before the actual independence celebrations. It is designed by Michael Alexander (author of this article) and will be struck to Proof quality by the Tower Mint, United Kingdom, on behalf of the treasury of the Principality of Sealand. The design on the reverse side of the coin is inspired by an actual photograph which was taken the very moment when Sealand’s flag was raised for the first time by Princess Joan. 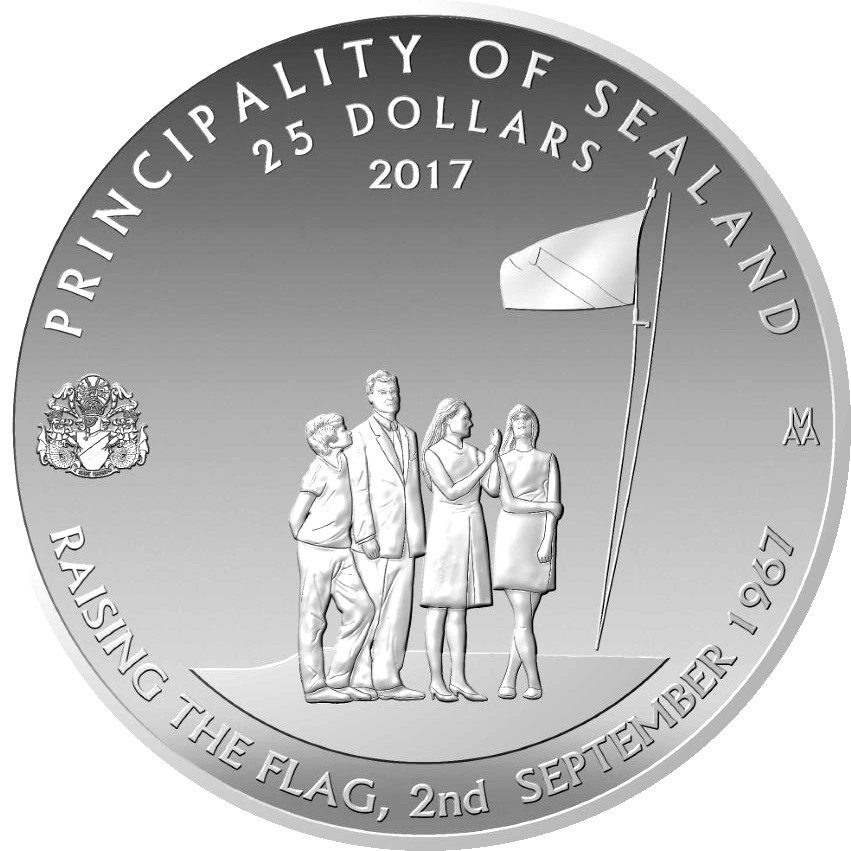 The commemorative text RAISING THE FLAG, 2nd SEPTEMBER 1967 is placed just under the image along the lower edge. The text for PRINCIPALITY OF SEALAND, the coin’s denomination of 25 DOLLARS, and the issue-year 2017 are placed above the central design in three lines. The designer’s initials, MAA, appear to the right of the primary design; Sealand’s coat of arms appears to the left. 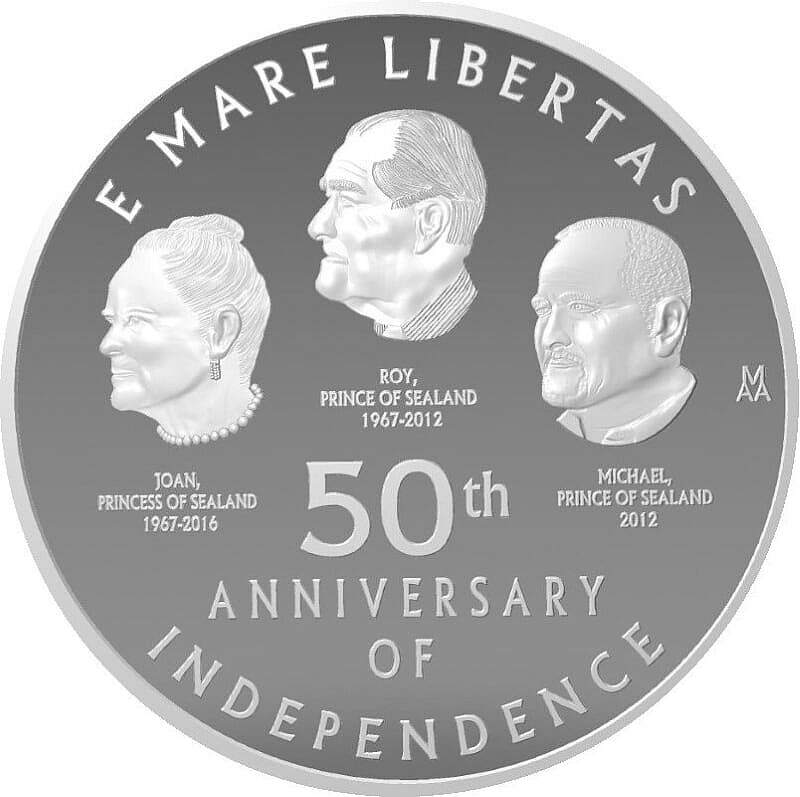 The obverse side includes detailed portraits of all three sovereigns since independence was declared in 1967. The top effigy is that of Prince Roy, who ruled from 1967 until his passing in 2012. The second effigy is that of Princess Joan, who was co-ruler from 1967 until her passing in 2016. The third effigy is that of Prince Michael, who was named as prince-regent in 1999. Michael succeeded his father in October 2012, and subsequently his mother in March 2016. He is now Sealand’s sole ruler. The independence commemorative is the first coin issued by the treasury of Sealand to include Prince Michael’s effigy. All three images are based on official photographs taken by Michael Alexander on the occasion of the 35th anniversary of Sealand’s independence in 2002. Sealand’s official motto, E MARE LIBERTAS (“From the sea, freedom”), is placed above the portraits; the commemorative text 50th ANNIVERSARY OF INDEPENDENCE is positioned below the portraits in four lines. The designer’s initials appear to the right of the portraits.

The coin was officially authorised on the 2nd September, the actual 50th anniversary of Sealand’s declaration of independence, and went into production from the 5th September. The coin will be encapsulated and presented in a custom, gold-coloured leatherette case imprinted with the principality’s commemorative dates and crest on the cover. As with the previous 2012-dated crown, the anniversary coin will be individually numbered from 001 to 300 and hallmarked on a smooth portion of the coin’s reeded edge using state-of-the-art laser technology. A numbered certificate of authenticity corresponding to the coin’s actual number will also be included. The treasury is now accepting pre-issue orders, which can be placed from the 18th September, with delivery expected within six to eight weeks from the date of production. The coin will thereafter be retailed directly by Sealand’s treasury. For more information on the 50th Anniversary of Independence coin, please visit their website.

Sealand’s Adventurous Journey to Independence Half a Century Ago.

Sealand’s origins are truly what legends are made of, a remarkable story which is half a century after its founding still being told. The disused and abandoned former air force watch tower was stumbled upon when former Army Major Roy Bates (1921 – 2012) was on the lookout for a safe location to set up a radio station and broadcast out of the jurisdiction of British broadcasting regulations. This was the origin of Sealand. Roy Bates landed on the tower in December 1966. It was located in international waters, thus it was out of the jurisdiction of the UK, and Bates prepared to broadcast from what was once known as Fort Roughs. More research on the tower, its location, and the discovery that it had, for all intents and purposes, been abandoned by its former owner — the British Armed Forces prompted Mr. Bates to challenge the notion that the territory could be recognised as an independent state. Bates answered with the well-established international law to do so.

On the 2nd September 1967, the 38th birthday of his beautiful wife Joan Bates — a former model — and in the presence of their two children, as well as friends and supporters of this idea — a specially commissioned flag was raised on Fort Roughs for the first time. This act is considered to be the actual declaration of independence for the newly created Principality of Sealand, breaking away from the United Kingdom and establishing not only a new state but also a new ruling dynasty of the Bates family which was headed by co-rulers Prince Roy and Princess Joan of Sealand.

Not long after it had been discovered by the British Government that Roy Bates had declared one of their former disused watch towers as an independent state, a plan to either destroy or re-occupy the man-made platform located just seven nautical miles from the coast of the UK was undertaken.

The now declared independent state of Sealand was created by claiming jus gentium over a part of the globe that was terra nullius. As such, the British Government decided they could not have what ministers described as a possible “Cuba off the east coast of England,” and the military was promptly dispatched to destroy all other remaining forts located in international waters. The Bates family looked on as huge explosions sent the massive structures hurtling hundreds of feet into the air and twisted and buckled debris floated past Sealand for days.

Helicopters carrying more explosives buzzed menacingly above, and the navy tug carrying the demolition crew passed close by the fortress home – with the crew shouting “You’re next!” Sometime later, a British naval vessel sailed to within 50 feet of Sealand, its boisterous crew shouting threats at fourteen-year-old Michael, and his sixteen-year-old sister Penelope. As an answer to their verbal threats, warning shots from the anti-aircraft guns positioned on the platform were promptly fired across the bow of the vessel by the young Prince Michael, causing it to hastily turn and race away towards the UK mainland, amidst a large cloud of black engine smoke.

Since Prince Roy was still a British citizen, a summons was issued under the UK’s “firearms act” and on the 25th of November 1968, both Roy and Michael found themselves in the dock of the Crown Court in Chelmsford, Essex. There was much argument — with the application of laws dating back to the 17th century being referred to in an effort to support Britain’s argument. However, the Judge hearing the case concluded that:

“This is a swashbuckling incident perhaps more akin to the time of Sir Francis Drake, but it is my judgment that the UK courts have no jurisdiction.”

As far as Prince Roy and the standards of international law were concerned, this was tantamount to Sealand’s first de facto recognition as an independent state.

Over time, Sealand has written its own constitution, adopted a currency and postage stamps, issued passports, and proclaimed citizens of the new Principality. Sealand held just as many accomplishments and setbacks as any other country — including a potential coup resulting from an unsuccessful invasion in 1978. Fast-forward to the last decade, which saw the official appointment of hereditary Prince Michael appointed as prince–regent by his father Prince Roy for the day-to-day affairs of the running of Sealand in 1999. Prince Roy himself passed away in October 2012, after a rule of 45 years, and Princess Joan, Sealand’s co-ruler, passed away in March 2016 after nearly 49 years of rule.

Prince-Regent Michael became Sealand’s sole sovereign ruler upon the death of his father and mother and is now known as Prince Michael of Sealand. His eldest son James is Sealand’s hereditary prince, and James’ eldest son Freddy is next in the succession.

Sealand continues to seek greater international recognition, and as a self-proclaimed micro-nation territory, Sealand now has the certain distinction as the world’s oldest man-made independent state.