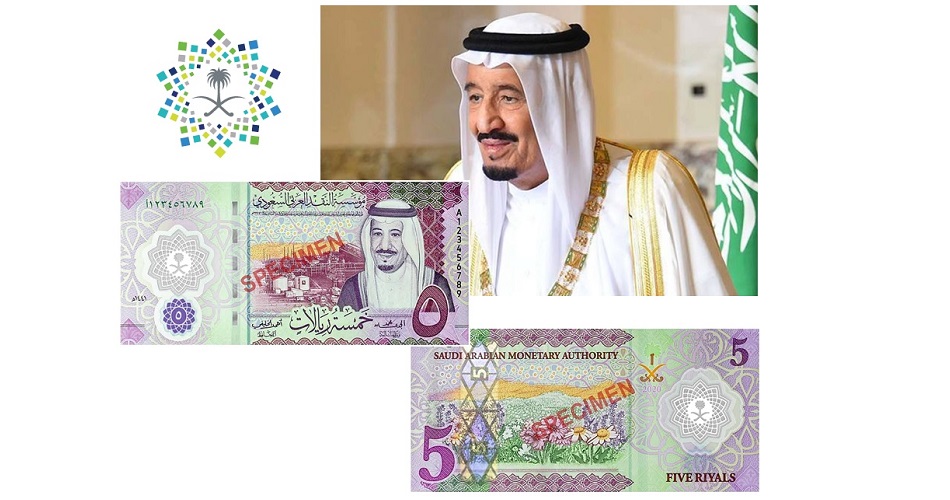 The Saudi Arabian Monetary Authority has issued (5th October) new five-riyal banknotes (U.S. $1.33) which are now printed on polymer. This denomination is now Saudi Arabia’s first circulation-type polymer banknote, as well as the first in the Middle East–North Africa (or MENA) region. The design is essentially carried over from the original paper version, which is part of the SAMA’s sixth series introduced with the accession of HM King Salman, that began in January 2015.

Slight modifications to the note include changes in security features to accommodate the note’s transition from paper to polymer. The addition of a transparent window where the watermark was previously seen is the most obvious change. The note retains the dimensions of 145 by 66 millimetres, as well as the dominant purple colour of the 2017 five-riyal paper version. Depicted on the face side is the Hijri year of ١٤٤١ (1441 AH), which can be seen just to the lower left of the window. A formal portrait of HM King Salman is placed on the right side. In the centre is an illustration of the Shaybah oil and refinery field, located in the northern edge of the Rub’ Al-Khali/Empty Quarter Desert.

The back side also retains the original illustration of a field of wildflowers from Saudi Arabia, focusing on the diverse landscapes in the Middle Eastern kingdom. The year 2020 is placed just to the upper left of the window.

Engraved print: The face of the new banknotes are printed using an engraved process, and, as such, a selection of the design can be felt to the touch.

Clear window:  A transparent window can be seen from both sides of the banknote, with motifs inspired by the logo of Saudi Vision 2030. The initiative is a strategic framework to reduce Saudi Arabia’s dependence on oil and diversify its economy. The national emblem of two swords and the palm is integrated into the logo.

Segmented security vertical stripe: A magnetic embedded security stripe on the face of the banknote, which can be seen in the shape of a metallic window thread, is machine-readable. The stripe appears segmented on the surface, but when held up to a source of light, the stripe appears as a solid line.

Optically variable ink application. Located on the face side just under the window, a geometric shape with the Arabic numeral ٥ changes colour from purple to green when the note is tilted under a light.

Tactile application: A raised print application located to the lower-left corner of the notes is included to aid identification of the note by visually impaired persons.

Iridescent Ink application: When viewed from the back side, a vertical strip located on the left half of the note is printed with iridescent ink that includes a decorative diamond pattern of shapes and the numeral 5 and is visible when tilted under a source of light.

The previous paper and new polymer notes will co-circulate, with the paper notes gradually being removed from circulation as they become unfit for circulation. For additional information about this new banknote and the previous SAMA banknote series and coins, please visit their website.