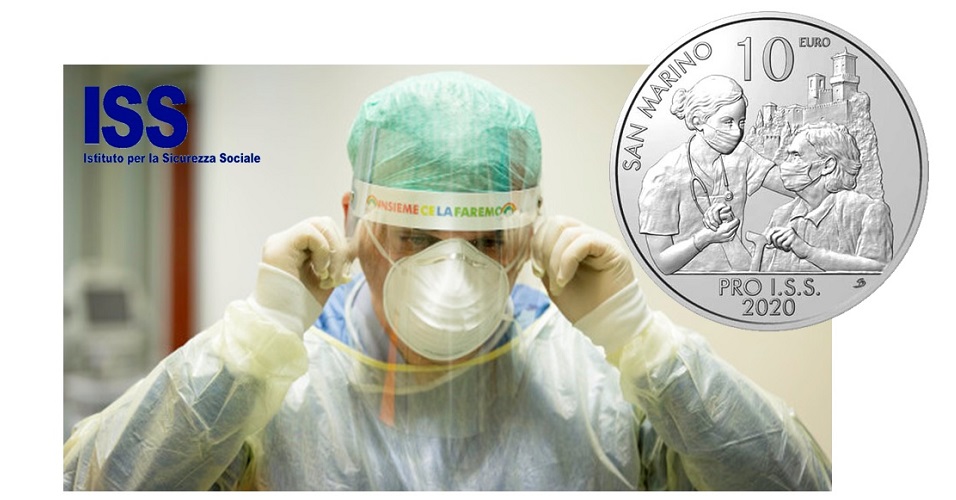 The Banca Centrale della Repubblica di San Marino has issued (17th September) new collector coins in aid of the Istituto per la Sicurezza Sociale (ISS), which has been at the forefront of the fight against the pandemic of the Wuhan strain of COVID-19. The ISS has taken the lead in San Marino as the country’s premier health authority coordinating national preventative measures to combat the pandemic. With a population of almost 35,000, the land-locked republic on the Italian peninsula has seen just over 730 confirmed cases of the virus, which is a far lower than average rate in Europe and internationally. As many countries’ health authorities have worked tirelessly to coordinate responses across Europe to contain the virus, the ISS has been no exception. Founded in 1955, the ISS has been the primary authority responsible for the overall health services of San Marino since that time. During the pandemic, the resources and manpower, as well as the commitment to ensuring the continued health levels of San Marinese, has been a priority of the ISS since the public emergency was declared.

The coins are produced by the Mint of Austria at their facilities in Vienna on behalf of the Banca Centrale della Repubblica di San Marino and are designed by artists Sandra Deiana (obverse) and Antonella Napolione (reverse). The image on the obverse of the coin depicts an ISS nurse who is tending to an elderly patient, representing the commitment of the ISS and the bond formed between care-giver and patient in countering the health emergency caused by the worldwide epidemic. Below the primary design is the text PRO I.S.S. (“for ISS”) 2020 and along the upper edge towards the left is the additional text SAN MARINO with the denomination of 10 EURO above the design. In the background on the right is the First Tower of San Marino.

The reverse side includes the standard crest of San Marino. The crest is surmounted by a closed crown, a symbol of the sovereignty. Three mountains are depicted with an ostrich feather over each of them. The crest is surrounded by a wreath, and below is the word LIBERTAS. Encircling the crest is the authority of issue REPUBBLICA DI SAN MARINO.

The proceeds from the sale of these coins will be donated to the ISS. Each Brilliant Uncirculated quality strike is encapsulated and available for its face value. For more information about this coin and other coins available from the Banca Centrale della Repubblica di San Marino, please visit the website of the Ufficio Filatelico Numismatico San Marino.