After roughly four days of availability, the United States Mint has received orders for 115,059 of the 2012 San Francisco Silver Eagle Sets. This special product went on sale on June 7, 2012, and will only remain available for ordering during a four week period.

Each set contains one proof and one reverse proof American Silver Eagle struck at the San Francisco Mint and carrying the “S” mint mark. The two coins are mounted in a custom blue lacquer presentation case with a certificate of authenticity. 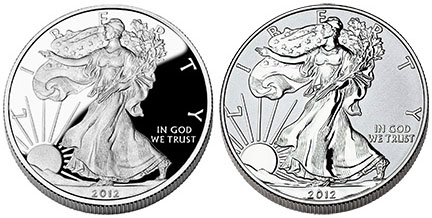 The orders for 115,059 sets has already surpassed the 100,000 maximum mintage that was established for the 25th Anniversary Silver Eagle Set. After this set sold out in less than a day, many customers expressed their dissatisfaction with the situation, which likely contributed to the different circumstances of offering for the latest set.

A sales counter is provided by the US Mint on the product page for the 2012 San Francisco Silver Eagle Set. Data for the cumulative total units ordered is updated each week day around 3:00 PM ET.

Sales will continue until July 5, 2012 at 5:00 PM ET. The sets will be produced to meet the total demand from customer orders placed during the four week period. Shipping is not expected to begin until late July 2012.