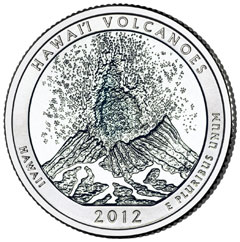 The San Francisco Mint recently opened its doors to members of the media to celebrate the 75th anniversary at the current location. Some reports from the tour included images or video footage of newly minted circulating quality quarters. This was unusual since for the past several decades, the San Francisco Mint has only struck quarters in proof quality and has not produced circulation strike versions.

An inquiry to the United States Mint has confirmed that circulating quality 2012 America the Beautiful Quarters with the “S” mint mark have been produced at the San Francisco Mint. These will be offered numismatic products or sets to be offered to collectors later this year.

Michael White of the United States Mint Office of Public Affairs said, “We were looking for a new numismatic product with an “S” mark.  Feedback we had received from customers was that there was always great anticipation with products that had the “S” mint mark.”

“We felt that an “S” mint mark on America the Beautiful Quarters would bring some additional visibility to the program. A business case was developed that supported moving forward with the product. The quarters that will be produced will be circulating quality and sold as numismatic products.”

For the subsequent years, the Mint has not yet determined whether the production of circulating quality America the Beautiful Quarters will continue.