Virtually anyone who ever visited the San Francisco Bay Area will either have traveled on or seen the Bay Bridge, connecting San Francisco with Oakland. Bigger, longer and older than it’s more famous orange-red brother the Golden Gate Bridge (which was completed in 1937, a year after the Bay Bridge) the bridge is vital in transporting people from the East Bay to the City. When completed, the Bay Bridge replaced a ferry service across the San Francisco Bay, which had been in use since the 1820s, and cut travel times down tremendously. It should not come as a surprise that the grand opening of the bridge was an event worthy of a big celebration. While most of the celebrations focused on the bridge itself, there was also a commemorative coin released, the 1936 San Francisco-Oakland Bay Bridge Half Dollar. In demand with collectors around the country, the issue proved popular, and it is now considered to be one of the more common classic commemoratives.

San Francisco (formally known as Yerba Buena) is located on a peninsula wedged between the Pacific Ocean and the San Francisco Bay. Across from the most famous liberal city in the world is Oakland, and beyond that is the rest of the United States. Initially founded as a Spanish Mission in the 1770s, the town remained a small agricultural community until the California Gold Rush commenced in 1848, quickly growing to the largest city in the Western United States, the gateway to the gold fields in the Sierra Nevada Mountains.

As early as the 1820s a ferry service was in operation across the San Francisco Bay to carry people and cargo across, bypassing a longer overland trip (even today travel time from Oakland to San Francisco around the bay, bypassing all the bridges is 90 minutes on a good day). For the next century there were many plans to build a bridge across the Bay, but actual construction would not start until 1933. Designed by Charles H. Purcell, the bridge has a total length of almost 4.5 miles, split over two different spans. Both sides meet at Yerba Buena Island, to which Treasure Island would later be attached (Treasure Island is an artificial island built shortly after construction of the Bay Bridge finished, in 1936-37). A 540 feet long tunnel cuts through the island, connecting both spans of the Bridge.

The bridge consists of two separate decks. Initially trains traveled on the bridge as well, but in the early 1960s the bridge was modified to remove the tracks. Initially both decks had been split to allow traffic in both directions on each deck, but following the removal of the train tracks east bound traffic use the lower deck and westbound traffic uses the upper deck. The eastern span has recently been replaced by new construction, and the whole bridge has received seismic retrofitting following the 1989 Loma Prieta earthquake in which one section of the upper deck collided onto the lower deck.

Opened on November 12, 1936 the opening itself was a grand scene destined for a grand bridge, with many notables (including an ex-President, Herbert Hoover) present. The opening caused massive traffic jams in San Francisco and would mean the end to the ferry that had connected San Francisco and Oakland for so long. The opening also saw another premiere: for the first time commemorative coins were being sold at drive-up-booths. The coin was, of course, the 1936 San Francisco-Oakland Bay Bridge Commemorative Half Dollar. 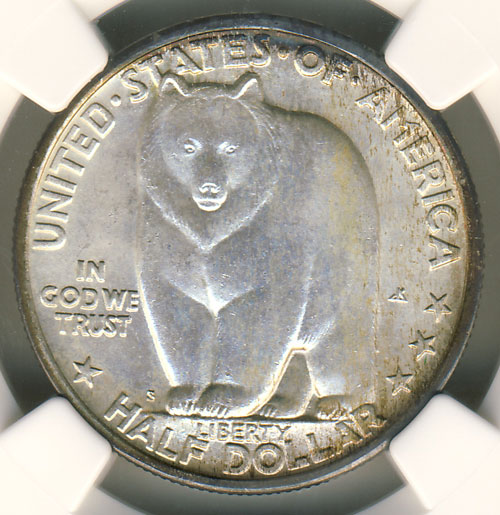 Authorized by the Act of June 26, 1936, the half dollar was issued by the Coin Division of the San Francisco-Oakland Bay Bridge Celebration. Designed by local artist and sculptor Jacques Schnier, the coin features a California Grizzly Bear (now extinct) viewed from the front. Around the bear is UNITED STATES OF AMERICA. In the left obverse field is IN GOD WE TRUST, and below the bear are the word LIBERTY and the denomination, HALF DOLLAR. Four decorative stars located between the words complement the obverse. The coins were all struck at the San Francisco Mint, and it’s mintmark, an S is found in the lower left field next to the bear’s right front paw. 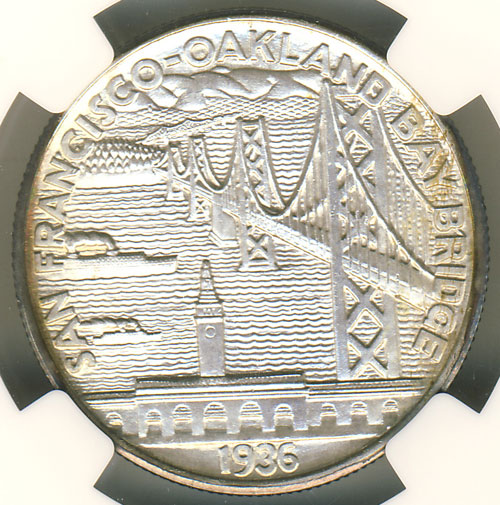 The reverse features one of the most realistic scenes ever placed on a United States coin. It shows the Bay Bridge, viewed from San Francisco. The old ferry building is on the foreground, and Yerba Buena Island is in the background. Only the western span of the bridge is visible. Two steamships are seen in the water. Around the scene is SAN FRANCISCO-OAKLAND BAY BRIDGE. The date, 1936, is found below the ferry building at the bottom of the design. It is obvious that this design was created with both the past and the present in mind. The ferries would become obsolete with the new bridge, which would become increasingly important to Bay area traffic with the growing number of automobiles over the next years.

A total of 200,000 coins were authorized for this issue, but only 100,000 were initially struck at the San Francisco mint in the fall of 1936. They were offered for sale to the public for $1.50 each (through various outlets, including the booths at the bridge we have mentioned before), or by mail for $1.65. Sales were good compared to other commemoratives issued at the time, but eventually 28,631 were returned to the San Francisco mint and melted. This leaves a net mintage of 71,639 coins.

Because of the sizable mintage this is now considered to be one of the more common classic commemoratives. Pieces up to MS65 are easily found, and generally have good eye-appeal. Even in MS66 this issue is available, but finer pieces become rare. PCGS and NGC have both graded a few pieces as high as MS68+, which are very difficult to find and generally only get traded when major commemorative collections are sold. While pieces in MS66 and lower are often untoned, for a Bay Bridge to be considered MS68 it will generally have to have, besides a strong strike and minimal marks, both spectacular color and excellent eye-appeal. Without a doubt, those pieces are a true tribute to both the Bay Bridge and the coin that commemorates it.