The United States Mint has started sales for bags and rolls containing circulating quality Acadia National Park Quarters struck at the San Francisco Mint and carrying the “S” mint mark. These coins are specially produced for numismatic products and not released for circulation.

Typically, the Philadelphia and Denver Mint produce quarters for general circulation. The Acadia Quarters carrying the “P” or “D” mint mark were previously released on June 11, 2012. This year the US Mint decided to strike circulating quality quarters with the “S” mint mark for the purpose of creating a new numismatic product line and bringing additional attention to the America the Beautiful Quarters Program. 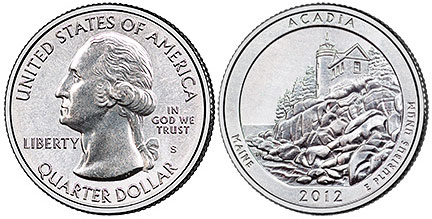 The reverse design of the Acadia National Park Quarter features a view of Bass Harbor Head Lighthouse and the coastline. The image captures the many representative elements of the park including the coastline, lighthouse, pine trees, and ocean. The obverse of the coin carries the 1932 portrait of George Washington designed by John Flanagan.

The US Mint is offering the “S” mint marked quarters in 100-coin bags priced at $34.95 and 40-coin rolls priced at $18.95. Each comes in distinctive packaging which indicates the park name, state location, mint mark, and face value.

There are no household ordering limits or stated maximum mintage. The Mint intends to offer the bags and rolls for one year from the initial release date.