The latest series is composed of five collector coins that re-create some of this painter’s most well-known works of art. 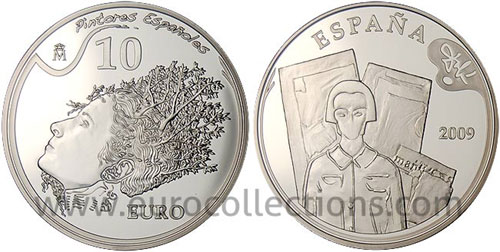 AUTOMATIC BEGINNING OF A PORTRAIT OF GALA, 1933 – A surrealist work painted by Dalí in 1932 in which he shows his desire to experiment with different stages of picture completion. 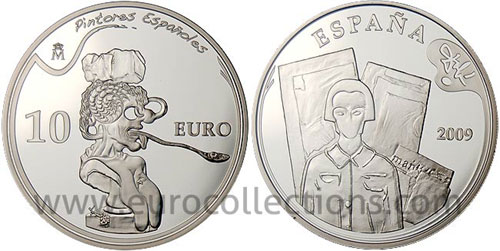 PORTRAIT OF PABLO PICASSO IN THE 21st CENTURY, 1947 – Picasso always maintained very good relations with Catalonia and from the early days of Dali’s career showed interest in his work. So it is not to be surprised that on Dali’s first trip to Paris the young artist was quick to visit Picasso. The latter received him in his studio and showed him how his work was developing at that time, an evolution that made a deep impression on Dali. Picasso’s new style, fairly similar in those days to that of Breton, must have inclined Dali’s way of painting towards surrealism for the first time.

SELF-PORTRAIT WITH L’HUMANITE, 1923 – The three commemorative silver coins then have a common obverse featuring a reproduction of this self portrait.

The 10 euro denominated silver coins are struck from 27 grams of 92.5% sterling silver on a 40mm (crown-sized) flan to the mint’s stringent proof standards. Each coin is then elegantly presented in an official Spanish Royal Mint blue jewel case with full-colour outer box, accompanied by a Certificate of Authenticity confirming the mintage of just 10,000 coins issued for the worldwide market.