Sales of 2011 commemorative coins offered by the United States Mint are scheduled to conclude on Friday, December 16, 2011 at 5:00 PM ET. Two separate programs feature the United States Army and the Medal of Honor.

The coins went on sale January 31, 2011 and were available at introductory prices until March 2, 2011. After this date regular pricing went into effect. Sales of the $5 gold coins were temporarily suspended in mid-August due to the rising market price of gold. Sales resumed prior to the end of the month under a flexible pricing structure.

As of the most recent sales report, the US Mint has sold 24,380 of the $5 gold coins, 159,449 of the silver dollars, and 104,719 of the half dollars, including both proof and uncirculated coins. Surcharges added to the price of each coin will be distributed to the Army Historical Foundation to support the construction of the National Museum of the United States Army at Fort Belvoir, Virginia. 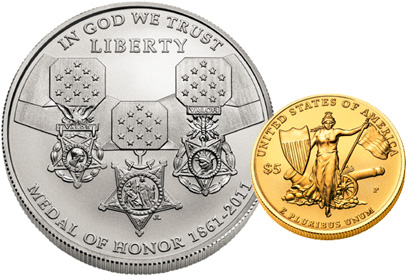 The coins went on sale at the United States Mint on February 25, 2011. Introductory prices were available through March 28, 2011, after which regular prices went into effect. Similar to the other program, sales of the $5 gold coin were suspended due to the rising market price of gold and later resumed under a flexible pricing structure.

As of the most recent sales report, sales have reached a combined 25,430 of the $5 gold coins and 149,953 of the silver dollars, across both proof and uncirculated versions. The price of each coin includes a surcharge distributable to the Congressional Medal of Honor Foundation to help finance its educational, scholarship and outreach programs.

By law, commemorative coins from each of the programs may only be issued during the one year period beginning on January 1, 2011. The US Mint typically ends sales at an earlier date to provide time for order processing and fulfillment.