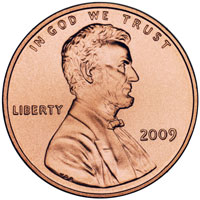 The United States Mint will conclude sales for several products which include Bicentennial 2009 Lincoln Cents on Tuesday, June 15, 2010 at 5:00 PM ET. The products include the 2009 Proof Set, 2009 Silver Proof Set, 2009 Uncirculated Mint Set, and the “Professional Life” and “Presidency” 2009 Lincoln Two Roll Sets.

The 2009 Uncirculated Mint Set includes a total of 36 coins. This includes the eighteen coins mentioned above from the Philadelphia and Denver Mint facilities. The coins are struck with a special satin finish that has been used for the annual uncirculated coin set since 2005. The coins are presented in two illustrated folders. The 2009 Mint Set originally went on sale October 1, 2009 and is priced at $27.95.

The 2009 Lincoln Cent Two Roll Sets have been issued for each of the four different designs released to celebrate the Bicentennial. Each set includes one 40-coin roll from the Philadelphia Mint and one 40-coin roll from the Denver Mint. The rolls are packaged in custom designed US Mint branded wrappers which indicate the design, mint mark, and face value of the contents. The two roll sets for the “Professional Life” design originally went on sale August 13, 2009 and the “Presidency” design went on sale November 12, 2009. Both are priced at $8.95 each.

These products can be ordered from the US Mint online at http://catalog.usmint.gov/ until the official end of sales on June 15, 2009 at 5:00 PM ET.