On Wednesday, June 30, 2010 at 5:00 PM ET, the United States Mint will conclude sales for the six District of Columbia & U.S. Territories First Day Coin Covers. These products initially went on sale throughout 2009, shortly following the circulation release of each coin. 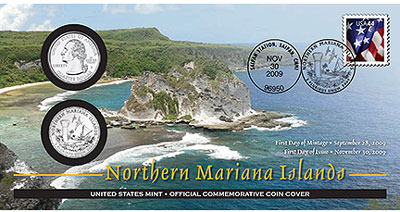 Each cover includes one coin from the Philadelphia Mint and one coin from the Denver Mint, sourced from the first day of production. The coins are mounted on a display card within an illustrated envelope. The envelope includes one U.S.P.S. Flags postage stamp and is postmarked with the circulation release date at the relevant location.

The covers are priced at $14.95 each, plus applicable shipping and handling charges. Orders may be placed at http://usmint.gov/