The United States Mint concluded sales of bags and rolls for the Andrew Jackson Presidential Dollars late last week. These numismatic products featuring the 7th President had been available for approximately two years. 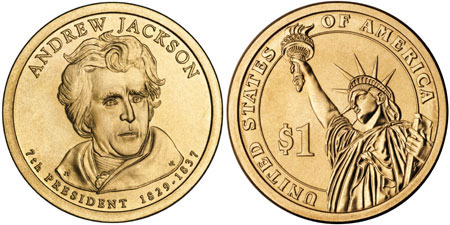 The 25-coin rolls and 250-coin bags featuring the Andrew Jackson Dollar were first released by the United States Mint on August 14, 2008. The rolls were priced at $35.95 each and the bags were priced at $319.95. Sales of these products continued until late last week when the offering was quietly concluded to coincide with the release of the James Buchanan Presidential Dollar rolls.

Andrew Jackson Presidential Dollars still remain available from the US Mint in boxes of 250 coins through the Direct Ship Program.