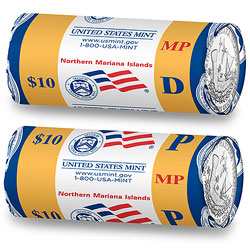 Earlier this week, the United States Mint concluded sales for the Northern Mariana Islands Quarter numismatic bags and rolls. This was the final quarter released in the one year District of Columbia & United States Territories Quarters Program.

For each of the six quarters released in 2009, the United States Mint had offered five different options under their line of numismatic bags and rolls. A two roll set was offered, priced at $32.95, which included one 40-coin roll from the Philadelphia Mint and one 40-coin roll from the Denver Mint. Additionally, there were 100-coin or 1,000-coin bags offered from either the Philadelphia or Denver mint facility. These were priced at $32.95 for the smaller size and $309.95 for the larger size.

The coins contained in each bag or roll were circulation strikes, but came packaged in specially designed wrappers or canvas bags with tags, which indicated the issue, mint of origin, and face value of the contents.

The number of bags and rolls sold has varied for each release, with the highest sales occurring for the Puerto Rico Quarter products. The table below displays the last reported sales for the numismatic bags and rolls offerings for each of the 2009 quarters.

In general, the bags and rolls for each quarter were only available for a few months. As each new quarter was released into circulation, the US Mint began offering bags and rolls for the new release and concluded sales for any remaining products from the prior release. In a few cases, some options sold out before this could occur.

The United States Mint will continue to offer numismatic bags and rolls for the new America the Beautiful Quarters series, although the product line has been downsized. For each coin of the series, the US Mint is offering the two roll set or the 100-coin bags from the Philadelphia or Denver Mint facility. The numismatic bags and rolls for the Hot Springs National Park Quarter went on sale April 19, 2010.