The United States Mint has started accepting orders for the 2012 Proof Set. This annual set includes 14 different coins, across six denominations, struck in proof quality at the San Francisco Mint. 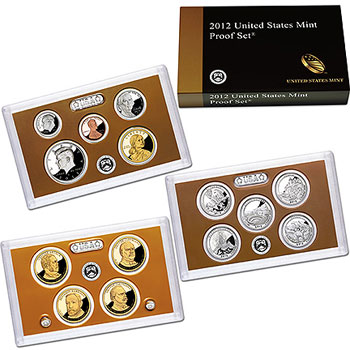 Rounding out the set are the 2012-dated Lincoln Cent, Jefferson Nickel, Roosevelt Dime, Kennedy Half Dollar, and Native American Dollar.

The fourteen coins are housed in three separate protective lenses and placed within an outer cardboard box. A certificate of authenticity is also included.

The 2012 Proof Set is priced at $31.95. There are no household ordering limits or product limits imposed. Orders may be placed online at http://catalog.usmint.gov/