Today, March 13, 2015, the United states Mint started accepting orders for the 2015 March of Dimes Silver Dollars. Authorized under Public Law 112-209, the coins are issued to recognize and celebrate the 75th anniversary of the establishment of the March of Dimes Foundation. 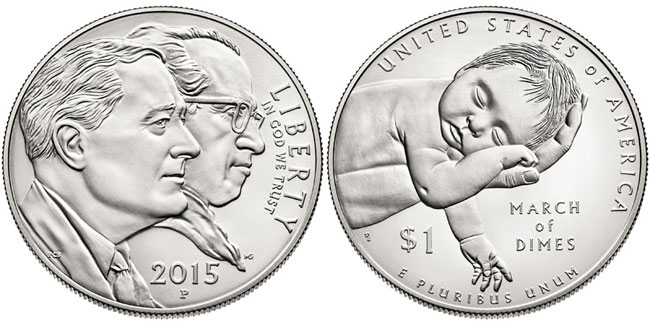 The obverse design of the silver dollar represents the past by depicting President Franklin D. Roosevelt and Dr. Jonas Salk, two leaders in the fight against polio. The inscriptions read “Liberty”, “In God We Trust”, and the date “2015”.

The reverse depicts a baby cuddled in the hand of a parent, representing the foundation’s dedication to the health of babies. The inscriptions read “United States of America”, “$1”, “March of Dimes”, and “E Pluribus Unum”.

Later this year, the Mint will offer a special three coin set containing the proof version of the March of Dimes Silver Dollar, a 2015-W Proof Roosevelt Dime, and a 2015-P Reverse Proof Roosevelt Dime. The silver dimes will not be available individually or within any other set. The special set will be limited to 75,000 units with an ordering limit of 5 units per household.

The prices for all products containing the 2015 March of Dimes Commemorative Silver Dollars include a surcharge of $10 per coin. These surcharges will be distributable to the March of Dimes to help finance research, education, and services aimed at improving the health of women, infants, and children.