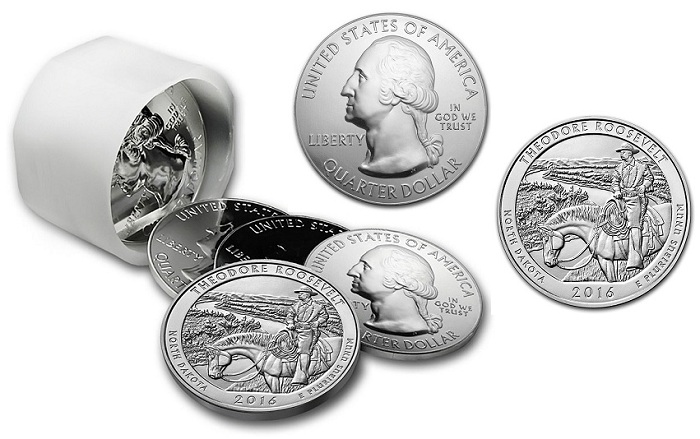 The U.S. Mint has announced that its authorized purchasers will be able to purchase 2016 Theodore Roosevelt National Park 5 oz. silver bullion coins beginning on August 29. These issues will share obverse and reverse designs with the fourth America the Beautiful quarter of 2016, which will be released at a launch ceremony four days prior on August 25.

The U.S. Mint’s bullion issues are sold to a network of authorized buyers, who then make the coins available to the public. Their cost fluctuates with the price of silver, which is roughly $20.71 per ounce at the time of this writing. The Mint also sells Uncirculated versions of these coins, which differ from the bullion issues in that they are struck and processed with more care, and carry a “P” mint mark. The Roosevelt 5 oz. Uncirculated coins are slated for release some time in October.

The coin’s reverse was designed by Joel Iskowitz and engraved by Phebe Hemphill. The image features a rendering of Theodore Roosevelt on horseback near the Little Missouri River, with the inscriptions THEODORE ROOSEVELT, NORTH DAKOTA, E PLURIBUS UNUM, and 2016 placed around the rim. 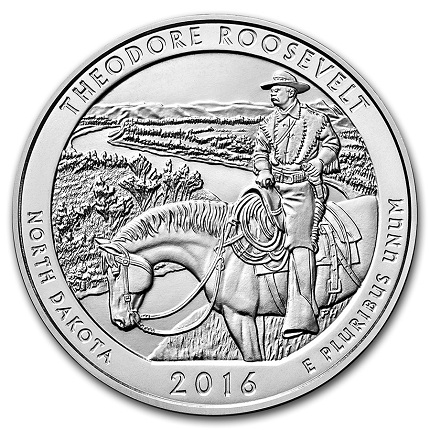 The obverse includes John Flanagan’s 1932 portrait of George Washington, along with the inscriptions UNITED STATES OF AMERICA, LIBERTY, IN GOD WE TRUST, and QUARTER DOLLAR. Bullion issues of this coin are struck at the Philadelphia Mint but do not carry a mint mark.

As noted previously, combined sales for the three 2016 5 oz. silver bullion coins released so far have hit 214,200 units for a total of 1,071,000 ounces of silver. Combined production of this year’s issues has surpassed the total for all of 2015, which wrapped up at 212,000 units. 2016 now has the second-largest annual mintage ever for 5 oz. America the Beautiful bullion coins behind 2011.