The United States Mint began accepting orders for the Rutherford B. Hayes Presidential $1 Coin Cover on October 4, 2011. This is the nineteenth release in the American Presidency $1 Coin Cover series, which began in 2007. 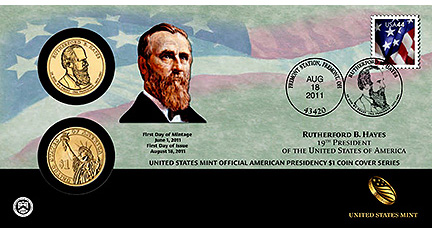 The covers include two Rutherford B. Hayes Presidential Dollars. The coins are from the first day of mintage at the Philadelphia and Denver Mints on June 1, 2011. The two coins are mounted within an illustrated envelope containing a 44-cent Flag postage stamp. The cancellation is from August 18, 2011, Fremont, OH, which represents the first day that the coins were released to the public.