The Central Bank of the Russian Federation have issued (27th December) a series of collector coins to mark the XXII Olympic and XI Paralympic Winter Games which will be held in the Black Sea resort city of Sochi. The series of ingot-style coins includes three issues, two gold and one silver. The obverse design carries one of the three official Winter Olympiad’s mascots. 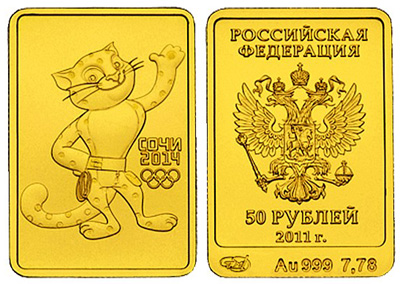 The first mascot to be depicted is a snow-boarding white leopard who was chosen by popular vote in Russia last year. Designed by Vladimir Pak, the 34 year old graphic artist from Nakhodka described his creation as “a rescuer and mountain-climber who lives in the uppermost branches of a huge tree, on the highest peak of the snowy mountains in the Caucasus.” The logo of the Games, which includes the traditional five inter-locked rings of the Olympiad, appears just to the right of the mascot.

The reverse depicts the Russian crest of the crowned double eagle carrying orb and sceptre along with the year of issue “2011” and the denomination below. Above the crest is the legend “РОССИЙСКАЯ ФЕДЕРАЦИЯ” (The Russian Federation) The coin’s fineness, weight and mintmark insignia also appear below the primary reverse design.

All three coins are struck to an Uncirculated quality. The games of the 2014 Winter Olympiad begin on the 7th February and conclude on the 23rd. 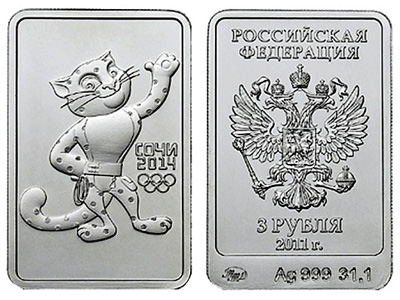 For more information on these and other coins issued by the Central Bank of the Russian Federation, please visit their website at: http://www.cbr.ru/eng/bank-notes_coins/memorable_coins/current_year_coins/print.asp?file=111227_eng.htm