The Real Casa de la Moneda de Espana have announced the issue of an official proclamation medal on the occasion of the accession of their new Monarch, HM King Felipe VI who succeeded his father King Juan  Carlos I on the 19th June. King Juan Carlos I announced his intention to abdicate on the 2nd June after a reign of 38 and a half years.

King Juan Carlos ascended to the Spanish throne on the death of the then-country’s head of State, General Francisco Franco who himself, had ruled Spain for almost four decades, since 1936. King Juan Carlos I is credited with placing the country onto a path of democratic reform – a new constitution which was adopted by the people by referendum guaranteeing the rights of the people to parliamentary government and to a constitutional monarchy and limiting royal prerogatives was signed into law by the King in 1981. King Juan Carlos unexpectedly announced his intention to step aside and the instrument of abdication was officially signed on the 18th June in the Palacio Real in the presence of the Prime Minister and cabinet along with senior members of the Royal family. The abdication took effect at midnight and the country’s new King Felipe VI was proclaimed in the Cortes where Felipe VI took his oath of office.

The new king, who had held the title of Prince of the Asturias – the traditional title for the heir to the Spanish throne was born in 1968 and officially invested with his constitutional position as next in line to succeed his father on his 18th birthday in 1986.Prince Felipe attended University in the US and graduated with a Master’s degree of Science in Foreign Service from Georgetown. Prince Felipe married his fiancé, Letizia Ortiz Rocasolano, an award-winning television journalist in 2004, who now becomes Queen Letitzia. The couple’s first child, a daughter named Leonor was born in 2005 with the couple’s second child, Sofia born in 2007. With the accession of Felipe as King, Princess Leonor becomes her father’s heir and first in the order of succession to the Spanish throne. 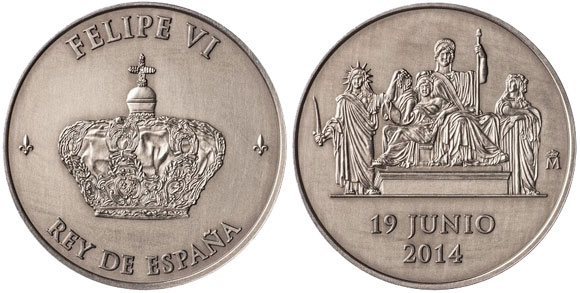 The medal, which depicts Spain’s crown in the center on the obverse, also includes the name of the new King “FELIPE VI” above along with the text “REY DE ESPANA” just below. Two fleur du Lyis ornaments are seen on either side of the crown. The reverse depicts the allegorical figures seen on the edifice of the Chamber of Deputies, where the proclamation of the King’s accession was read. The date of accession “19 JUNO 2014” is seen below the primary design.

The Real Casa de la Moneda have announced that the medal is available for purchase from the 24th June and that the medal will be produced until the 30th September to meet the demands of collectors wishing to add this item to their collection.

For more information on this and other coins produced by the Real Casa de la Moneda, please visit their website at: https://tienda.fnmt.es/fnmttv/b2c/start/(xcm=Z_TIENDA)/.do Information offered in Spanish & English – international orders dispatched.