The Royal Mint has announced that a silver coin produced from salvaged silver recently recovered from the sunken merchant ship, SS Gairsoppa will now be made available to collectors through the Royal Mint web-shop. Minted from a shipment of silver bullion that has spent more than 70 years under the sea, the coins have previously only been offered in the United States via an exclusive arrangement with precious metals dealer A-Mark Precious Metals, Inc. and their distributor Merit Gold and Silver. 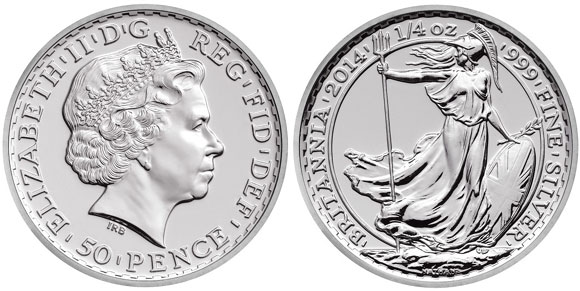 The story began in December 1940, when The Royal Mint, already depleted of its stocks of silver due to the onset of war in 1939, called in additional supplies from India. A large shipment was dispatched aboard the British steam merchant ship, the SS Gairsoppa, which was also carrying shipments of pig iron and tea. She sailed under the protection of a series of naval convoys heading for Britain. Battling a heavy storm and running short of coal off the coast of Southern Ireland, SS Gairsoppa’s crew had no option other than to break free from the protection of their convoy and head for the safety of  Galway Harbour. Now an easy target, the unfortunate vessel was spotted and torpedoed by a German U-boat at 8 minutes past midnight on 17 February 1941. The stricken ship sunk within 20 minutes, with second officer R. H. Ayres the only survivor in spite of heroic attempts to save his fellow crew members.

Concerned correspondence between The Royal Mint and the Bank of England at the time reveals the impact the loss had on the country’s wartime reserves, even threatening the temporary suspension of production at the 1,000 year-old Mint within two months if supplies were to run out. 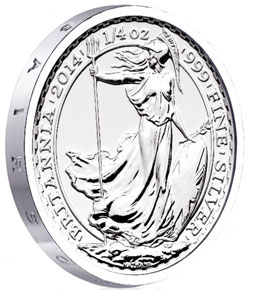 The ship was finally located in September 2011, 300 miles off the Irish coast at a depth of three miles, half a mile deeper than the Titanic, making this the largest and deepest recovery of precious metal from a shipwreck in history. Retrieval company Odyssey Marine Exploration passed some of the silver recovered from the SS Gairsoppa to The Royal Mint for the striking of the 99.9 pure 1/4oz silver Britannia bullion coins, which are edged with the name SS Gairsoppa.

The coins carry a face value of 50 pence and are minted with the year “2014” featuring the classic and original reverse design of “Britannia” created by Philip Nathan which has appeared at various times from the start of the bullion series and on other years intermittently. The obverse includes the current circulation coin portrait of HM Queen Elizabeth II designed by sculptor Ian Rank-Broadley and in use on British & several commonwealth countries since 1998.

By pre-ordering from The Royal Mint website, customers can secure their own piece of history from this moving wartime story, along with a DVD featuring Silver Rush, the three-episode TV series aired by the Discovery Channel documenting the recovery of the sunken hoard. Shipping of the coins is likely to start from 21 April.