The Royal Mint have packaged their first ever official engagement coin of HRH Prince William and Miss Catherine Middleton in a new convenient packaging, designed especially to be stocked by several British retail stores. The special presentation contains a collector’s quality uncirculated coin in an elegant folder with the Royal coat of arms at the top of the presentation card contained in a re-sealable cellophane bag. 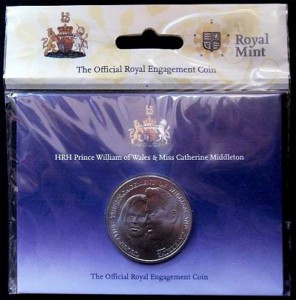 The coin, struck for Alderney, in the Channel Islands, is minted in cupro-nickel and has a five pound face value. The reverse portraits, designed by Matthew Buonocorsi of the Royal Mint, depict the princely couple with the text “CELEBRATING THE ENGAGEMENT OF WILLIAM AND CATHERINE”. The obverse of the coin carries the well known portrait of HM Queen Elizabeth II by sculptor Ian Rank-Broadley.

This is the Royal Mint’s first numismatic product which will be available in retail stores. All 29 of the upcoming 2012 Olympic 50 pence coins will also be similarly packaged for retail sale.

Prince William and Miss Kate Middleton announced their engagement on the 16th November after an almost ten year courtship. The wedding will take place on the 29th April at Westminster Abbey. An official wedding crown issued from the United Kingdom is also planned and will be issued closer to the actual wedding day.