The Royal Mint have announced the issue of further silver ounce bullion coins to mark the Lunar new year with the addition of an edge privy mark denoting the year of the Ram. Following on the success of the Britannia bullion edge letter privy mark issued for the Year of the Snake and Year of the Horse coins in 2013 and 2014,

The Royal Mint has revealed a new 2015 Britannia bullion coin designed to celebrate the ‘Year of the Ram’ to add to the collection. The special edition 1oz .999 fine silver 2015 Britannia bullion coins bear a Lunar privy mark symbol of Ram’s horns incused on the flat edge representing the Chinese Lunar Year of the Ram, which began on the 19th February 2015 and have been produced by The Royal Mint at their facilities in the United Kingdom. 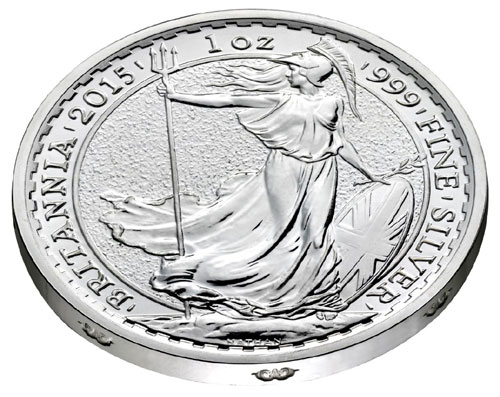 The coins are packaged in tubes of 25 coins or “monster boxes” of 500 coins and developed exclusively for our distribution partner A-Mark. The Britannia bullion coins feature the classic 1987 depiction of the female representation or allegorical figure of Britain by esteemed sculptor Philip Nathan. His iconic Britannia stands windswept in a classical gown, waves at her feet, with trident, shield and olive branch in hand, elegant and enduring more than 25 years later. The obverse portrait includes the Ian Rank-Broadley portrait of HM Queen Elizabeth II – the Queen’s portrait was amended this year so this will be the last Britannia coin to include this effigy, the 2016 dated coins will include the fifth portrait designed by Royal Mint engraver Jody Clark. The Royal Mint’s decision to change the bullion Britannia coins to .999.9 fine gold (from .916.7 fine) and .999 fine silver (from .958 fine) in 2013, along with enhancements in packaging formats in 2014 have been well received worldwide.

The coins are available exclusively from the Royal Mint’s Distributor A-Mark who have commissioned these additional Lunar year coins. Their products can be viewed by visiting their website at: http://www.amark.com/products For information on Royal Mint bullion-related products, please visit their website at: http://www.royalmint.com/bullion Information offered in English – international orders dispatched where applicable.