The Royal British Mint have launched (1st November) the designs for the 2012 Silver Britannia bullion coin, which has had an annual mintage since 1997. The gold Britannia celebrates its 25th anniversary in 2012 with the first issues being struck in 1987. 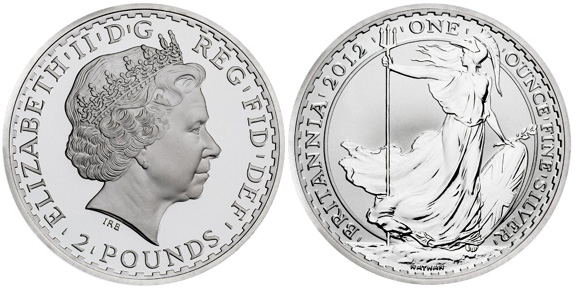 The reverse of the 2012 coin re-creates the original depiction of Britannia which was sculpted by Philip Nathan. He is the designer of a number of other coins for the Royal Mint including the Royal Wedding crown of the Prince of Wales to Lady Diana Spencer in 1981, a portrait to mark the late Queen Mother’s 80th birthday, and an official coin design for Her Majesty The Queen and Prince Philip’s Golden Wedding anniversary, just to name but a few. Nathan’s design portrays Britannia as a standing figure, depicting her in a classical, flowing gown, armed with her trident and shield, and wearing a Corinthian helmet. He succeeded in creating an instantly recognisable female personification of the British Isles.

The obverse of the coin carries the effigy of Her Majesty Queen Elizabeth II which was sculpted by Ian Rank-Broadley and in use on British circulation and commemorative coinage since 1998. The denomination of “2 POUNDS” appears below the portrait on the obverse.

For more information on this and other coins offered by the Royal mint, please visit their website at: http://www.royalmint.com/