The Royal Mint have launched (27th January) the commemorative coins issued for 2014 in several versions of precious metals – including gold, silver and piedfort options. The six coins issued for the year – four commemorative and two one pound coins which are part of a special “Floral” series are all included in one set. A standard silver set is now available as well as a silver piedfort version and a gold set struck in 22 carat or .916 fine. 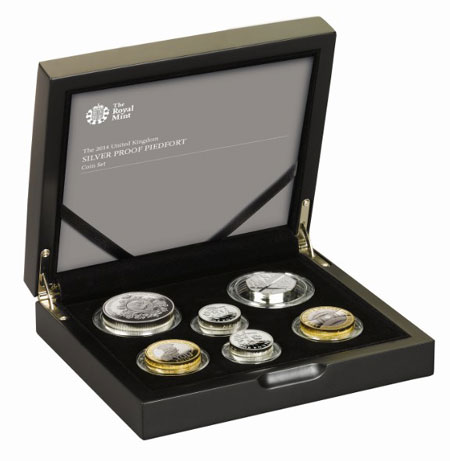 This year’s commemorative coins, range from anniversaries which mark the end of the Stuart dynasty in 1702 – to the centennial of the start of the Great War in 1914 and also marking the 500th anniversary of Trinity House, the organization responsible for the safety of British coastal waters. 2014 will also see a commemorative coin with a sports theme, as the UK will be hosting the Commonwealth Games in Glasgow. The two remaining one-pound coins designed as part of the UK’s “floral” series completes set for the year. 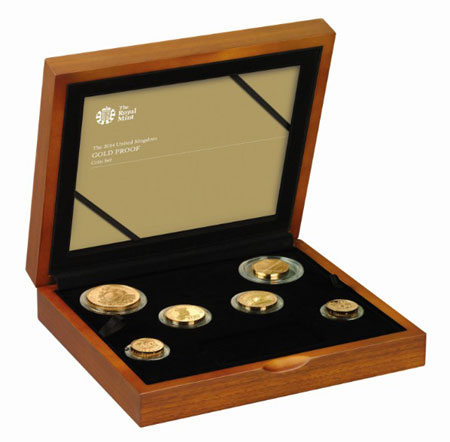 In addition to the six coin sets of commemoratives, options with the definitive “Shield” design set of eight circulation coins as designed by Matt Dent are also being issued inclusive in one product, also in the silver and silver piedfort options as mentioned above. 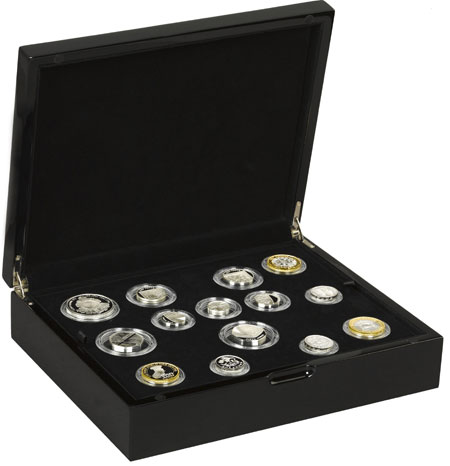 300th Anniversary of the Death of Queen Anne £5 coin. The Stuart Dynasty, having succeeded to the English throne in 1603 with the death of Queen Elizabeth I, she herself being the last Tudor Monarch – reigned until 1714 when Queen Anne (1665 – 1714) who reigned from 1702 died without any heirs of her own. She was succeeded by George Louis, the grandson of Elizabeth Stuart, daughter of King James VI of Scotland (later James I of England) who was himself – Elector of Hanover. The coin’s reverse includes Queen Anne’s portrait styled as an eighteenth-century miniature surrounded by an elaborate frame that incorporates her 1707 Royal Arms. The reigning British monarch, Elizabeth II, is Elizabeth Stuart’s direct descendant of the eleventh generation.

100th Anniversary, outbreak of the First World War, £2 coin. With the assassination of the heir to the Austro-Hungarian throne in 1914, defense treaties between European allies took shape resulting in the formation of the Central powers and the triple alliance. The new £2 coin, the first in a five year series includes one of the era’s most recognizable images, that of the powerful likeness of the call to arms by Lord Kitchener. Under Lord Kitchener’s portrait, the text “YOUR COUNTRY NEEDS YOU”

The 500th Anniversary of Trinity House £2 coin. Trinity House is the official General Lighthouse Authority for England, Wales, the Channel Islands and Gibraltar. Ever since their formation having been granted a Royal Charter by Henry VIII in 1514, they have maintained the responsibility for the provision and maintenance of navigational aids, such as lighthouses, lightvessels, buoys, and more recently in its history, maritime radio/satellite communication systems. The coin’s reverse, includes a design which captures the spirit of Trinity House with that enduring symbol of the seas – the lighthouse.

The Glasgow 2014 Commonwealth Games 50 pence coin. The XXth Commonwealth Games will be hosted this year in the Scottish city of Glasgow from the 4th to the 15th April. A total of 71 teams will be competing in 21 sports events. The reverse of the new 50 pence coin includes a design which embodies the power of sport personified in a cyclist and athlete, the home of the Games reflected in the artist’s choice of Scottish Saltire and lettering inspired by Glasgow-born architect, artist and designer, Charles Rennie Mackintosh.

The “Floral” series 2014 UK £1 coins for Scotland and Northern Ireland.

The continuation of the series featuring the floral emblems of the British Isles designed by Timothy Noad sees the shamrock and flax plant adorn the Northern Ireland £1 coin, and the thistle and bluebell decorate the Scottish £1 coin. The two earlier designs, those coins representing England and Wales were both issued last year.

For more information on these and other coins, please visit the Royal Mint website. Information offered in English – international orders dispatched.