The Royal Mint, UK have launched their latest and final coin to mark the Queen’s Diamond Jubilee, the sought-after five pound gold coin piece. Equal in weight to five sovereigns, the five pound gold coin is unique for 2012 as it includes a specially commissioned reverse design of St. George slaying the dragon which marks the Queen’s 60th year of reign.

The five pound gold coin piece made its debut in 1820 as part of British coinage reform that followed in the wake of the Napoleonic Wars. Struck more as a presentation piece than for everyday circulation, it was minted especially for collectors whenever there was an important change to the coinage such as a new portrait for the Monarch or to celebrate an important royal occasion, most notably coronation years. 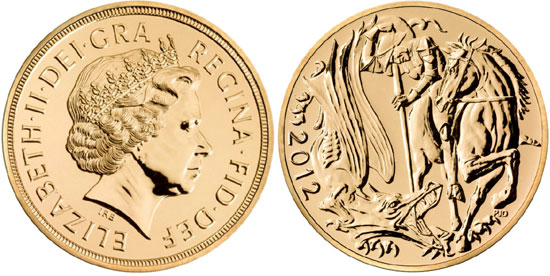 The 2012 issue is only the fourth Sovereign reverse design change in 141 years. The coin features a reverse design centered on the image of St George and the dragon by artist Paul Day which will be issued only this year as part of the Jubilee celebrations. Previously, the reverse design included Benedetto Pistrucci’s famed and traditional depiction of St. George which have graced British gold and silver coinage since 1817. A commemorative design was issued in 1989 for the 500th anniversary for the Sovereign denomination and a special reverse heraldic rendition of St. George slaying the dragon was used for the 2005 issue.  This version – is an Uncirculated or FDC issue, a quality strike which was first issued in 1984.

The obverse effigy of Her Majesty Queen Elizabeth II depicted is that which was designed by Ian Rank-Broadley FRBS. This portrait has been used on all British circulation coinage, and many commemorative coins as well as on several commonwealth country’s coinage since 2003.

The coin is struck in 22 carat or .917 fine gold with a weight of 39.94 grams and a diameter of 36.02 mm. A total of just 1,250 pieces have been authorized with 1,000 pieces being included in limited edition presentation packaging.

For more information on this and other coins offered by the Royal Mint, please visit their website at: http://www.royalmint.com/our-coins/ranges/gold-coins