The Royal Mint have launched the latest addition to the popular Britannia proof range of coins, representing the the smallest coin to be minted since the formation of the United Kingdom more than 300 years ago. At just an 0.8 grams in weight and 8 mm in diameter, this is one of the smallest precious metals coins to be produced by any Mint. Following on from Robert Hunt’s 2013 Grecian Britannia, this year’s elegant yet powerful interpretation by Royal Mint engraver Jody Clark features an art deco Britannia, standing proudly in front of a three-dimensional globe, accompanied by a lion, its tail draped protectively around her feet. 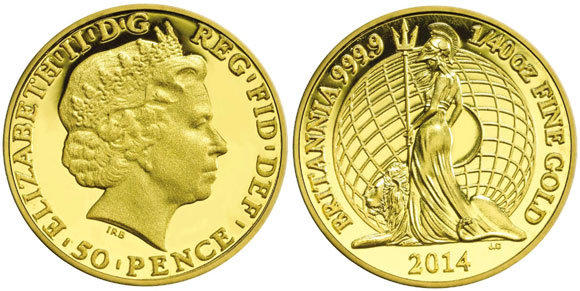 The allegorical figure, or representation of Britannia first appeared on Roman coins about 2,000 years ago, and since then has evolved to represent the strengths and challenges of Britain, from queen of the seas on the copper coins of George III to the warrior seen on the pennies of George IV and through the change brought about by decimalization when she graced Christopher Ironside’s famous seven-sided 50 pence coin. Britannia returns in 2014 re-imagined in a stunning contemporary reverse design. The Britannia collection for 2014 was launched in July with a choice of individual coins and sets, struck in .999 fine silver or .9999 fine gold. This is now followed by the release on an individual basis of the Fortieth-Ounce coin in September. 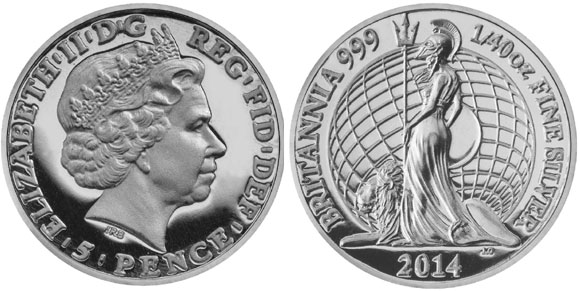 Each coin is housed in a distinguished Royal Mint case, tailored to each coin or set, complemented by a booklet that reveals Britannia’s story and the inspiration behind the design. A Certificate of Authenticity will accompany the chosen item, confirming that it is part of a limited presentation.

For information or to order the new 2014 Britannia Gold and Silver Proof Coins, please visit this section of the Royal Mint website. Information offered in English – international orders dispatched.