The Royal Mint have launched four new coins of significant size to mark the 100th anniversary of the commencement of the First World War, once known as the Great War. The coins launched include gold and silver one-kilo coins and five-ounce coins with very limited mintages and startling designs to mark an anniversary being observed in many countries all over the world. The Royal Mint has commissioned two artists whose work has been previously noted for their detail, artistry and individuality in style. 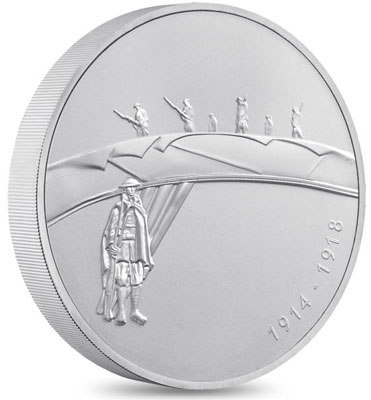 Michael Sandle RA, known for his war-themed work, has created a haunting reverse for the 2014 Kilo, depicting the sadness of soldiers moving from the trenches into no man’s land, in the form of a lonely figure of a soldier in full cape and familiar ‘Brodie’ helmet marching through the mist. 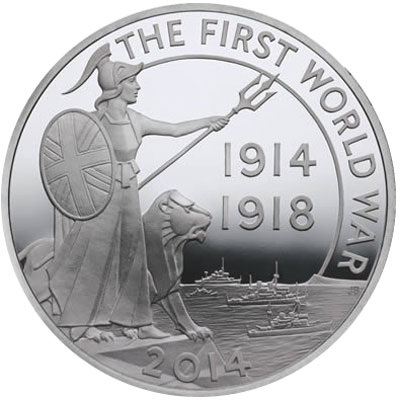 John Bergdahl, recently designed the coins marking the Christening of Prince George, his Five-Ounce coin design recalls the first wave of troops departing Britain, watched over by Britannia, with a lion at her side, guardian of Britain.

The obverse of each coin features the current coinage portrait of Her Majesty the Queen by Ian Rank-Broadley FRBS, used on all British circulation and many commemorative coins since 1998. The coins have been finished to The Royal Mint’s Satin Proof standard, highlighting every detail created by their artists and refined by the artistry of The Royal Mint’s engravers.

Each coin is presented in its own handsome case and is accompanied by a Certificate of Authenticity to confirm its low mintage. Each coin comes with a booklet giving a snapshot of Britain at the outbreak of war, and the inspiration behind the designs. The Kilo and the Five-Ounce, in fine silver and fine gold are issued as part of its on-going five-year programme commemorating the First World War, from outbreak to armistice.

For information or to order this and other coins related to the 100th anniversary of the First World War, please visit this section of the Royal Mint website. Information offered in English – international orders dispatched.