The Royal Mint have launched a new product which brings together one of the most recognized denominations ever in circulation within the United Kingdom, that of the large bronze penny.

The most recent one penny coin was introduced into circulation during the reign of Queen Victoria in 1860. Reduced in size from the older copper penny introduced during the reign of her grandfather King George III, the last penny of pre-decimalization lasted until 1971 when it was eventually removed from circulation. A smaller decimal penny replaced the larger penny thereafter and is still in common everyday use.

The new set, comprised of one penny from each reign from Queen Victoria to Queen Elizabeth II for a total of five coins. Queen Victoria and Queen Elizabeth II – both Diamond Jubilee queens – are Britain’s longest ruling sovereigns, between them reigning over Britain for more than half of the last 200 years. The other monarchs include Edward VII, George V and George VI.The coins are included in a colorful presentation folder with information of each monarch who had circulation coinage issued during their reign. 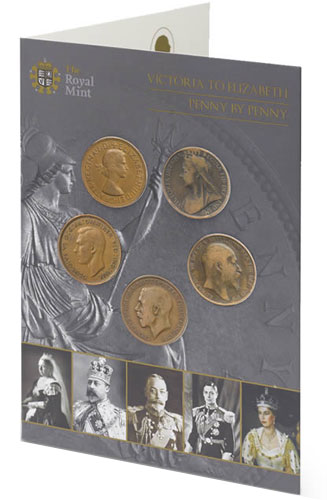 Victoria’s 63 1/2-year reign began with a portrait by William Wyon RA, whose beautifully flattering ‘Young Head’ remained on copper coins until 1860. With copper being replaced by bronze that year, a new portrait – affectionately known as the ‘Bun Head’ – was prepared by Leonard Charles Wyon, son of William. A third portrait would appear on bronze coins from 1895, known as the ‘Old Head’ which is included in the set, by Thomas Brock RA.

Edward VII was the first and only British king of Saxe-Coburg-Gotha – the family name inherited from his father, Albert, Prince Consort. Edward succeeded to the throne on the death of his mother at the age of 59, having been heir apparent for longer than anyone else in British history until Prince Charles took that title in 2011. The elegant coinage portrait of the king was created by George William de Saulles.

George V carved out a Naval career until the death of his elder brother, Prince Albert. In the First World War George V changed the family name by Royal Proclamation, choosing instead Windsor, for the castle that still provides home and haven for the Royal Family. His portrait was created by Australian sculptor Bertram Mackennal, a highly regarded artist and a favorite of the king.

As his Coronation approached Edward VIII selected a flattering portrait by Humphrey Paget, insisting on his better profile being captured for posterity and so facing in the same direction as his father – against centuries of tradition whereby succeeding monarchs face in opposite directions. During his short reign coins were never released into circulation, but rare pattern pieces are held by The Royal Mint Museum.

Unlike his elder brother, George would not bow to vanity when it came to his coinage. The king faces to the left, choosing to acknowledge the reign of Edward VIII, but acting as if Edward had complied with convention on his coinage portrait. George VI is uncrowned, the portrait by Humphrey Paget simple, balanced, technically near-perfect and somehow reassuring.

As the young Queen took her throne her first coins were important to mark a new era, and continuing tradition. Sculptor Mary Gillick portrayed Elizabeth as youthful and fresh, wearing a wreath of laurel. Since then, there have been three additional standard coinage effigies – by Arnold Machin RA in 1968, Raphael Maklouf in 1985 and the current portrait by Ian Rank-Broadley FRBS since 1998, which has taken her beyond a Diamond Jubilee.

Britannia first appeared on coins in Roman times, coming to symbolize Britain and her values. It is Britannia that unites the pennies in this set, for she has appeared on the coins of every monarch since she was reintroduced to the coinage in 1672 under Charles II.

The coin set is available from the Royal Mint, a total of 900 sets have been produced. For more information on this and other historic coins and sets, please visit this section of the Royal Mint website. Information offered in English – International orders dispatched.