The Royal Mint have launched the second crown to be issued this year which focuses on the two hundredth anniversary of the Battle of Waterloo – the decisive battle which turned the tide of European domination from one single entity or authority, that of the French Emperor Napoleon. The story of the battle in a real sense begins with the end of France’s thousand year old absolute monarchy in 1789 with the storming of the Bastille on the 14th July and what became regarded as the start of the French revolution. This event resulted in the overthrow of the autocratic King Louis XVI in 1791 – seen as aloof and uncaring about his subjects but who, had initially begun his reign with the ideas of “enlightenment” something that was opposed by the nobility. 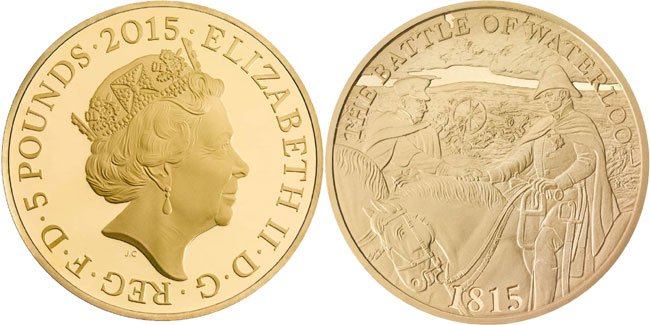 The King’s growing indecisiveness and conservatism as well as the extravagance of his Queen, the Austrian born Archduchess, and later Queen Marie Antoinette led some elements of the people of France to view them as a symbol of the perceived tyranny of the Ancien Régime, and their popularity deteriorated progressively. Louis XVI’s royal prerogatives were suspended and he was eventually arrested, one month before the newly proclaimed constitutional monarchy was officially abolished and the First French Republic proclaimed on the 21st September 1792. King Louis XVI was tried by the National Convention and executed in January 1793. His consort, Queen Marie Antionette followed her husband to execution in October of the same year. Louis XVI is the only King of France ever to have been executed, and his death brought an end to more than a thousand years of continuous French monarchy. This single event is regarded as having ushered in the lawlessness and persecution of what many referred to as the reign of terror. This chapter of conflict between rival political factions was marked by mass executions of “enemies of the revolution”. With the chaos ensuing in France, it became clear that the need for stability and an end to the national nightmare fostered the right conditions for one man to rise to the occasion.

Napoleone di Buonaparte, later Napoleon Bonaparte (1769 – 1821) was born in Corsica to a relatively modest family of noble Italian ancestry. He became the leading figure of the Revolution after his celebrated military campaigns in Italy and Egypt from 1796 until 1799. Fortune smiled upon this young and charismatic military strategist who had been promoted to the rank of General and by 1799 Napoleon gained ultimate control of the First Republic and installed himself as First Consul thus ending the French revolution itself and with few restrictions of personal power and on his control of France.

The new First consul had the popularity, the power and the prestige of a King so, in 1804, Napoleon went one better, by crowning himself Emperor of the French people. Napoleon, as Emperor dominated European affairs for almost two decades while leading France against a series of coalitions against continuing domination and aggression by French forces. He won the large majority of his battles and seized control of most of continental Europe by installing members of his immediate family onto existing or newly created thrones before his ultimate defeat.

The War of 1812 or the Sixth Coalition (1812–1814), was an alliance of the armies from Austria, Prussia, Russia, the United Kingdom, Portugal, Sweden, Spain as well as a number of smaller German States banded together which finally defeated France. With its army in tatters, having suffered an unimaginable defeat, Napoleon returned to France from the frontlines and signed his abdication in favor of his infant son on the 4th April 1814 and he was sent into exile to the island of Elba by the terms of the treaty of Fontainebleau.

Aware of rumors that he was about to be banished to a remote island in the Atlantic Ocean, the former Emperor of the French escaped from Elba on the 26th February 1815 eventually landed on the French mainland, two days later. Soldiers loyal to Napoleon made contact with him in March 1815 near the town of Grenoble and marched with him to Paris prompting the newly restored Bourbon King Louis XVIII to flee the capital. On the 13th March, the powers who defeated him in the last war declared Napoleon an outlaw. From the 20th March, Napoleon governed for a period referred to as the Hundred Days and by the start of June the armed forces available to him had reached 200,000 in number, encouraging Napoleon to go on the offensive and attempt to drive a wedge between the oncoming British and Prussian armies. The French Army of the North crossed the frontier into the newly liberated and established United Kingdom of the Netherlands, what is today modern-day Belgium to a small town called Waterloo located in the province of Walloon Brabant.

Napoleon’s forces encountered the allies of Britain and Prussia, led by The Duke of Wellington and Gebhard Leberecht von Blücher on the 18th June 1815. Wellington’s army withstood repeated attacks by the French and drove them from the field while the Prussians arrived in force and broke through Napoleon’s right flank. With this battle and its conclusion a ‘fait accompli’ as far as the future of the emperor was concerned, he returned to Paris and found that both the legislature and the people, ardent supporters of his campaign just weeks earlier, had now turned violently against him. Realizing his position was untenable, he abdicated for a second time on the 22nd June once again in favor of his son. When Napoleon learned that Prussian troops had orders to capture him dead or alive, he considered an escape to the United States, but as British ships were blocking every port, Napoleon demanded asylum and boarded HMS Bellerophon on the 15th July 1815 bound for the remote south Atlantic island of St. Helena, where he had feared being sent to earlier – leaving French soil for the final time and permanent exile.

As a consequence of this decisive battle, Field Marshal Arthur Wellesley, 1st Duke of Wellington was hailed a national hero and well regarded in many of the countries who had achieved their freedom from French rule. The Duke of Wellington is considered today as one of the leading military and political figures of the 19th century. His popularity ushered in a career in politics as he was twice British prime minister from 1828 to 1830 and then for less than a month in 1834. But the overall result of the battle was far reaching and substantially wider than the end of tyrannical rule over the European continent.

The battle – which lasted only one day, definitively ended the many campaigns of wars that had convulsed Europe, and involved many other regions of the world—a pre-cursor to the First World War of 1914-1918. The battle put an end to the First French Empire, of Napoleon Bonaparte and his brand of European cohesiveness which placed much of the continent under his direct or indirect rule. But ultimately, the battle of Waterloo brought to a war-weary populace almost half a century of international peace in Europe as no further major conflict occurred until the Crimean War in 1853. 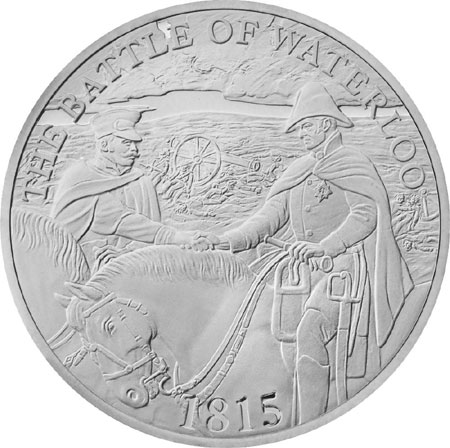 The coins, struck in cupro-nickel, silver and gold are designed by artist David Lawrence of the Royal Mint and features the moment of the handshake between a triumphant Duke of Wellington and General Gebhard Leberecht von Blücher, head of the Prussian forces in the spirit of camaraderie, both men seen on horseback along with the remnants of the battle in the background. The incused text “THE BATTLE OF WATERLOO” is placed along the upper edge superimposed over the primary design with the year “1815” seen below the design. 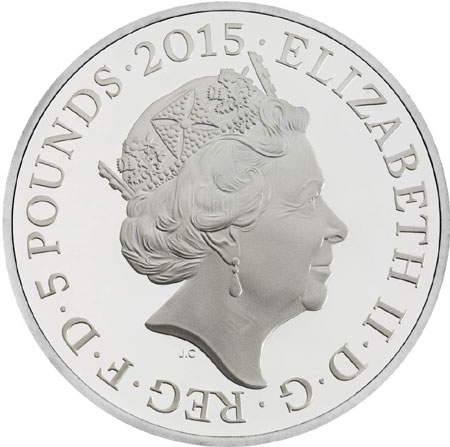 The obverse includes the fifth effigy of HM Queen Elizabeth II, created by Royal Mint engraver Jody Clark and introduced earlier this year. The cupro-nickel crowns of the same reverse design which were issued in December 2014 include the fourth portrait of HM Queen Elizabeth II as designed by Ian Rank-Broadley. It is the first time in which a British commemorative crown coin of the same reverse design or theme includes two different obverse effigies.

The coin is accompanied with a colorful and informative booklet that explores the battle, its great leaders, its legacy on the world – and its impact on Britain’s coinage. In the wake of Belgium’s planned €2 commemorative coin marking the 200th anniversary being cancelled earlier this year owing to opposition by a fellow Euro-zone member, this coin takes on more significance in marking this historic anniversary.

For more information on the 200th Anniversary of the Battle of Waterloo Commemorative Coins or to place an order, please visit the Royal Mint product page. Information offered in English – international orders dispatched.