Centered around the charity’s iconic panda logo at the heart of the design, is a dolphin, gorilla, rhino, polar bear and butterfly. Other symbols featured on the coin include a car, a wind turbine, coffee bean, and a human footprint to represent man’s impact in the world. The coin’s year of issue, “2011” is placed below the collage of figures.

The reverse design was created by award winning graphic artist Matthew Dent, who also designed the UK’s innovative circulation “puzzle style” Heraldic shield coins introduced in 2008. Matthew commented, “My idea was to design a selection of stylized icons to represent the various facets of WWF – shapes that would not only complement the famous panda logo, but would also be recognizable when fitted onto the coin’s face.” 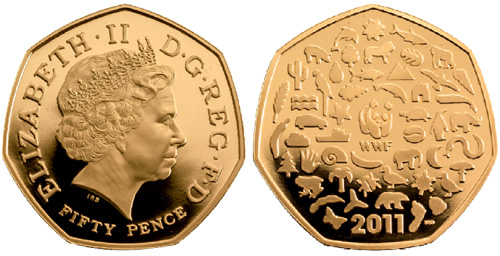 The obverse carries the familiar Ian Rank-Broadley portrait of HM Queen Elizabeth II along with the coin’s denomination of fifty pence.

Established in 1961, the World Wildlife Fund was founded by a group of wildlife experts including Sir Peter Scott, who joined forces to combat environmental problems across the world. Fifty years later, WWF is tackling much more than just the conservation of endangered species and their habitats.

For more information on this and other coins offered by the Royal Mint, please visit their website at: http://www.royalmint.com/