The Royal Canadian Mint have launched (5th March) a set of three coins marking the centennial of the fateful maiden voyage of the RMS Titanic. The coins were unveiled at the Maritime Museum of the Atlantic in Halifax, Nova Scotia by Ian Bennett, President and CEO of the Royal Canadian Mint.

Canada is forever linked with the story of the RMS Titanic through the efforts of Canadian ships that took part in recovery operations and by the memory of the lives lost that rest peacefully in Halifax cemeteries. The super-liner’s only journey began on the 10th April 1912 and sadly ended on the morning of the 15th April just 375 miles off the coast of Nova Scotia and taking with it more than 1,500 fatalities. 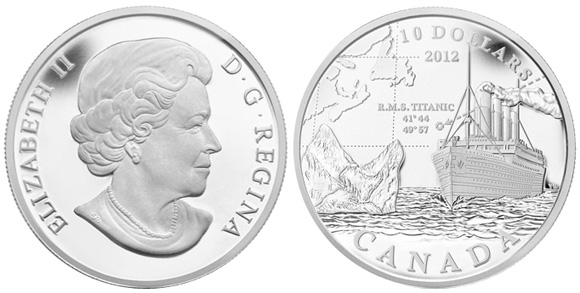 The ten dollar coin, which is designed by Maritime artist Yves Bérubé, features a finely detailed image of the bow and port side of the colossal vessel as it travels westward on its tragic maiden voyage, the North Atlantic waters shimmering in its wake. The iceberg that sealed Titanic’s fate lurks in the foreground. The obverse includes the current circulation effigy of HM Queen Elizabeth II designed by Susanna Blunt, which has been used on Canadian coinage since 2003. The ten dollar coin is struck in 99.99% pure silver with a weight of 15.8 grams and a diameter of 34 mm. A mintage of 20,000 pieces is authorized. 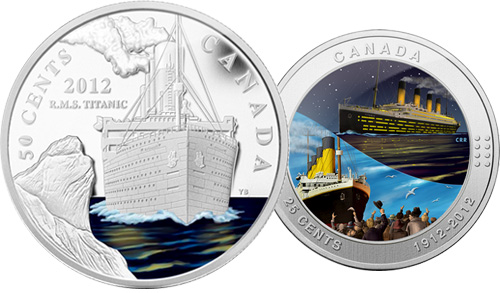 The remaining two Titanic Commemorative Coins offered by the Royal Canadian Mint include a 50-cent silver-plated colored coin limited to 15,000 coins worldwide and a 25-cent colored coin with no stated mintage limit.

For more information on this and other coins issued for the Titanic’s centennial memorial anniversary, please visit the website of the Royal Canadian Mint at: http://www.mint.ca/